Simmons’ 40-time has Etienne working ‘this pizza off’

Simmons’ 40-time has Etienne working ‘this pizza off’

Travis Etienne was enjoying his meat lover’s pizza at Joe’s New York Pizza in Clemson when he looked up and saw what Isaiah Simmons did at the NFL Scouting Combine this past Saturday.

While the Clemson running back was scarfing down a pizza, Simmons ran a 4.39 in the 40-yard dash, the second-fastest time by any linebacker at the combine since 2006, behind only Shaq Griffin’s time of 4.38 in 2018, according to ESPN Stats & Info.

“When he ran that 4.39, I texted in the group text that ‘Dang! You got me wanting to work this pizza off,” Etienne recalled while laughing following Monday’s practice at the Poe Indoor Practice Facility in Clemson.

“I was like, ‘Dang! I have to go home and hit a couple of pushups and get a little jog in or something’ because that man was flying,” he continued.

Etienne and Simmons have had on-going competition, a friendly one that is, going since Etienne arrived as a freshman in 2017. When got to Clemson, everyone was going on and on about Simmons’ speed, saying he was the fastest player on the team.

“Everyone said he was the fastest and no one really knew who I was, so I just kind of challenged him and came out with a little win, and I try to keep that above his head,” Etienne said. “I knew if I raced him again it was going to be a lot closer.”

And it was. Etienne won the second time, too. However, when the two raced for a third time, Simmons came out on top or so he claims. For months the two have gone back-and-forth over the results of that third and final race, with Simmons even calling out his friend during his media interviews from the combine. 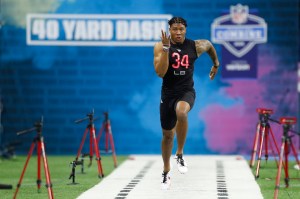 Simmons said he won the rematch, but it just wasn’t on tape. Etienne finally confessed to Simmons’ claim that he did beat him in an 80-yard sprint.

Considering he is 6-foot-4 and weighs 238 pounds, Simmons’ 4.39 in the 40 was one of the more impressive things seen at the combine in quite some time. To give it some perspective, his 4.39 is faster than NFL running backs Saquon Barkley’s 4.40 and Christian McCaffrey’s 4.48 from their combines.

“I have watched Isaiah run around here for three years. He has always been flying,” Etienne said. “Coming into my freshman year, everyone claimed he is the fastest guy that is why we kind of got into a little battle.”

Simmons’ 40-time did not surprise Etienne at all, claiming the linebacker did not do anything out of the norm. However, Etienne knows he will have a tough hill to climb next year when he is participating in the 2021 NFL Combine.

“He has been flying around here for a long time, but I am definitely going to reset it for everyone coming after me,” said Etienne, who claims he has not run the 40 since he ran a 4.38 in high school. “He did set the bar, so I will have to get back to work.”

However, Etienne did not get back to work until Sunday. He never did those pushups or take that small jog on Saturday night.

“No, I didn’t do it. I was eating my pizza and enjoying myself,” he said while smiling.