‘It was a strange time for sure’

‘It was a strange time for sure’

From first win at Chapel Hill to season ending due to COVID-19, the 2019-’20 season was a unique year for Clemson basketball

Never in the previous 66 years had Clemson left the ACC Men’s Basketball Tournament without a loss. Sixty-six times the Tigers tried to win an ACC Tournament Championship and all 66 times they came home empty handed.

However, this year was different. In the 67th annual ACC Basketball Tournament, Clemson came back following a victory, but it was not what the Tigers imagined it would be. Instead, following a victory over Miami in the second round of the tournament, they came home due to the COVID-19 pandemic.

Just before Clemson’s tip against top-seed Florida State on March 12, the ACC canceled the rest of the tournament and awarded the Seminoles, the regular season champions, the tournament championship by default.

“It was a strange time for sure. I have been doing this a long time and this was certainly a unique season. And it had kind of an incredibly unique ending to it.,” Clemson head coach Brad Brownell said to The Clemson Insider earlier this week.

It was a crazy season for the Tigers because they did a lot of great things, while also having a few head scratching moments.

For the first time in school history, Clemson beat North Carolina in Chapel Hill. The Tigers were 0-59 before finally ending the streak. They also beat three top 6 six teams in No. 4 Duke, No. 5 Louisville and No. 6 Florida State, that is the first time that has ever happened in one season.

However, the Tigers played horrible in non-conference losses to Minnesota, South Carolina and Yale, were swept by Virginia Tech and Georgia Tech in ACC competition and lost by 12 points at Wake Forest despite holding the Demon Deacons to 56 points.

“I said it in our banquet. I have been around teams for almost 30 years and as a head coach for 18, and it is one of the most unique seasons that I have ever been a part of,” Brownell said. “The highs were extremely high.”

Clemson closed the season on a high a note, thanks to its 69-64 victory over Miami in the ACC Tournament. The win allowed the Tigers to close the book with a 16-15 overall record. It’s seventh straight winning season under Brownell.

Also, let’s not forget Clemson won the Gold Medal representing the United States at the 2019 World University Games this past summer in Italy. 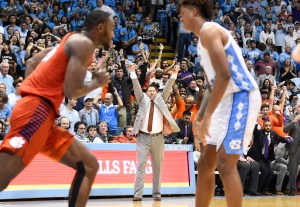 Clemson head coach Brad Brownell reacts at the end of the game as forward Aamir Simms (25) and North Carolina Tar Heels forward Armando Bacot (5) are in the foreground. The Tigers defeated North Carolina in overtime for their first win ever in Chapel Hill at the Dean E. Smith Center. (Bob Donnan/USA TODAY Sports)

“The win in Chapel Hill, now that is a remarkable thing. The 2019-’20 team will be known as the team that ended the streak,” he said. “You can tell on my face after the game was over how emotional that was. That’s one of my more emotional wins at Clemson because if I had a nickel for every time somebody said something to me about that game, you know, that would be pretty good.

“It was all different age people and all different scenarios. I have heard every scenario there is from ‘I live in North Carolina with all this people and I have had to deal with it my whole life so Coach can we please win.’ The person who was 82 years old and ‘Am I ever going to see them do it.’ To Tim Bourret who had been there 32 times and never watched them win to everywhere in between. Former players, to people that were embarrassed about it, fans that are upset.”

Brownell said he had people tell him that if he was to win in Chapel Hill, they will build a statue of him.

“I told them, ‘I don’t need a statue, I just need a win so we can get that monkey off our back.’ That is like lots of people, you know what I mean,” the Clemson coach said. “It was a big deal and it was a big deal to North Carolina to keep us from winning there. You could tell. We never got to sneak up on them. They were always ready to play us. You could tell that, and I think they would tell you that, too. Nobody wanted to be the first to lose to Clemson. Nobody wanted to be the team to lose to Clemson. It was a big thing.

“So for this team to be the team that did that and to do it the way we did it, with a great comeback and to execute late in the game in regulation and then to execute in overtime with all the back cuts. Man, that was high-level basketball the last six or seven minutes of the game. Our guys played under tremendous pressure to finish the game, so that made that unbelievably special.”

And was just one part of an unbelievably weird college basketball season.