Competition is tight as Clemson tries to find a new center

Competition is tight as Clemson tries to find a new center

Clemson is looking for a starting center for a second straight year after Sean Pollard graduated from the football program.

Right now, senior Cade Stewart (6-3, 305) is battling with redshirt freshmen Mason Trotter and Hunter Rayburn for the starting spot, while redshirt junior Blake Vinson will also be in the mix once the team gets back to work.

“We have some good ones. I am excited about Cade, first of all. I think Cade is one of the more powerful guys we have had in our offensive line,” Clemson head coach Dabo Swinney said. “He has done a nice job for us and he is ready to step in. I think he is going to be great.

“We have crossed trained guys all the time. Blake is a veteran guy. We are going to work him at guard and center. So, I am excited about getting him back. He is going to get a little more position work as spring goes along.”

Getting the opportunity to move into a starting position for the first time in his career, Stewart is making the most of his work this spring.

“It’s been great being at center, I’ve got a lot of role models from the past centers before me,” he said. “I look up to Jay (Guillermo) every day, you know we watch older film. He was a big influence and guy in my life. I’m just trying to take it day by day and improve the best I can every day.”

Swinney says the position battle is fluid because there is more to it than just snapping the football. 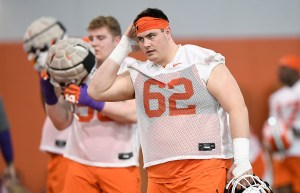 Stewart says he got better thanks to the second group of offensive linemen this spring. Though young, the senior saw a lot out of the freshmen in the nine practices the Tigers had before the COVID-19 pandemic canceled the rest of the workouts.

“It’s been interesting,” he said. “We’ve got a really young second group. The freshmen are really stepping up and that’s a lot of pressure on a young guy to come up here and adjust that fast. I think they’re handling it really well.”

Clemson offensive line coach Robbie Caldwell is also cross training Trotter (6-2, 270) and Rayburn (6-4, 315) at both center and guard this spring.

“We have been cross training some of those other guys. Mason Trotter is a powerful young kid, too. He is starting to get his body where it needs to be and then Rayburn is a big athlete,” Swinney said. “He is a really good athlete. He reminds me of a Dalton Freeman type of a kid. Probably a big athlete that can get in there. He probably could play tackle for us if we needed him. So, he gives us some versatility.”

As an older guy on the team, Stewart takes on a big responsibility in leadership. For him, his role has expanded to getting himself better while helping those behind him on the depth chart.

“We’ve got Rayburn and Trotter working behind me right now with the second group,” he said. “I see a lot of myself in both of them. It’s a complex system at center, it really is. They’re trying to learn the ropes. They’re physical guys but they’ve got to get the mental aspect down and they’re doing a great job at it now.

“I’m just trying to help them every day. Improving one little thing every day is the best that they can do and they’re coming along really fast and doing a really good job.”

–-Alex Turri contributed to this story

GREENSBORO, N.C. – The Atlantic Coast Conference and the Charlotte Knights have announced that the 2021 ACC Baseball Championship will be held at Truist Field in Charlotte, North Carolina, May 25-30. (…)