If there is anyone who knows Deshaun Watson and Trevor Lawrence, it is their former go-to guy Hunter Renfrow.

The former Clemson wide receiver, now a starter for the Las Vegas Raiders in the NFL, played the 2015 and 2016 seasons with Watson and then played his last year at Clemson with Lawrence in 2018.

Renfrow was on the Colin Cowherd Show Monday. Cowherd asked the two-time national champion, who caught the game-winning touchdown in the Tigers’ 2017 CFP National Championship win over Alabama, the similarities between the star quarterbacks.

“They are similar from a poise standpoint. I mean, literally, nothing bothers either one of them,” Renfrow said. “I remember that last drive to go beat Alabama and Deshaun just kind of calmly sat there, looked at us and said, ‘Alight, this is our time. Let’s go be legendary.’ It was just like playing a video game. ‘This is what we have to do, and we have done it before. We do it practice all the time. We do it to end halves all the time, let’s go win this game.’”

And that is what Clemson did. 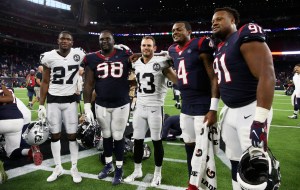 After Alabama quarterback Jalen Hurts scampered 30 yards to put the Crimson Tide up 31-28 with 2:01 to play in the game, Watson led the Tigers on a 9-play, 68-yard drive, which he capped with a 2-yard touchdown pass to Renfrow with one second to play.

Though Renfrow did not experience any last second heroics with Lawrence during their one season together in 2018, he knows he has the same quality as Watson. The Tigers’ quarterback proved that in this past year’s Fiesta Bowl win over Ohio State in the CFP Semifinals.

With his team trailing the Buckeyes, 23-21, late in the game, Lawrence led Clemson on a 94-yard drive in just four plays, which he capped with a 34-yard touchdown pass to running back Travis Etienne with 1:49 to play.

“Trevor is the same way [as Watson],” Renfrow recalled. “I can remember the 2018 national championship that we won when Trevor was a freshman and Trevor forgot to do a motion or something and we kind of figured it out during the play and he was like, ‘My bad!’ He is like a suffer. You know? He just kind of has that relax mentality, the long hair and is just the coolest guy on the field and nothing is over the top for him … ‘If I don’t make the play on this play, no big deal. I will make a 50-yard throw on the next play.’ It is the best is yet to come for him.”

Though both quarterbacks are cool under pressure, Renfrow also spoke about the different ways they get the job done. Watson is more of improviser, can make plays when there is nothing there.

As for Lawrence, he can see it before it even happens.

“I would say Deshaun, and not to say Trevor is not a baller because he is unbelievable, but Deshaun has the unique ability to kind of like have eyes in the back of his head,” Renfrow said. “He can scramble around. I think it was against the Bills this year he was playing. He kind of spun around and got the ball to his running back. They either scored or set up the game-winning score to win. That is how Deshaun is. He has that uncanny ability to make plays. He sees where the rush is coming from.

“But Trevor, he is 6-6 and he can see it before they come. That is what was so impressive to me about Trevor’s freshman year. He never really got in trouble. He got the ball out quick. He knew where his check downs were and that is the difference to me. Trevor has a good ability to see the whole field, where Deshaun can scramble around and see the whole field. That is kind of the difference to me.”

And when a play broke down, they both always found Renfrow. That is why he knows them so well.