How fitting is it that C.J. Spiller, Trevor Booker and Jack Leggett were named to the same Hall of Fame Class at Clemson on Monday?

Those three men collectively held the Clemson Athletic Department together, if you will, in the late 2000s. These days, the Clemson Football program has shined a light on Clemson University like never before with all the success it has had in the last 10 years, but before that the football program was just an average program that would occasionally have a pretty good year.

At the time, the Clemson Baseball and Basketball program’s at Clemson were getting more recognition, from a national standpoint, than football. Leggett’s baseball program was in the middle of its unprecedented runs to the College World Series and Super Regionals, while Trevor Booker led the Tigers to their first ACC Tournament Championship Game in 62 years.

Though football was not winning national championships and ACC titles every year like it is now, Spiller did give Clemson fans a glimpse of the future when he became one of the most exciting players in all of college football in 2009.

From 2006-2010, just look at what these three men did for Clemson athletics. They brought the nation’s attention to Clemson in all three major sports at one point or another.

In 2009, Spiller finished sixth in the Heisman Trophy race and was named the ACC Player of the Year. He led the Tigers to the ACC Championship Game for the very first time and was named the game’s Most Valuable Player after rushing for a career-high 234 yards and scoring four touchdowns.

Spiller was electrifying every time he touched the football, and everyone wanted to get a glimpse of him so they could see what he would do next. He scored a then Clemson record 21 touchdowns, by running the football, catching it, and returning it. Oh, by the way, he also threw for a touchdown in his Clemson career. There was not anything Spiller could not do, as evident by his All-American status on the track.

He was also an All-American on the football field, too. In fact, he was just third unanimous All-American in Clemson history. By the way, he also graduated from Clemson and went on to be the No. 9 overall selection in the 2010 NFL Draft. 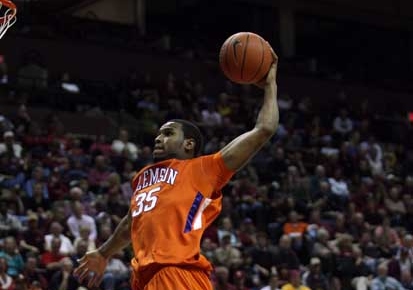 Trevor Booker was an All-American, too, and became the first ACC men’s basketball player with 1,500 points, 1,000 rebounds, 200 assists, 200 blocks and 100 steals in a career. (File Photo/The Clemson Insider)

Booker graduated from Clemson, too. On the basketball court, he was one of the best players Clemson has ever had.

In his last three years in Tigertown, Booker led the Tigers to the NCAA Tournament straight three years, tying the school’s longest streak at the time, which would be broken the next year.

The Whitmire, S.C., who just recently announced his retirement from the NBA, finished his Clemson career in the top five in Clemson history in scoring (1,725) and rebounding (1,060). Booker also led the ACC in field goal percentage and rebounding in 2008-’09, the first player to do that since Tim Duncan in 1996-’97.

Booker went on to be drafted in the first round of the NBA Draft. 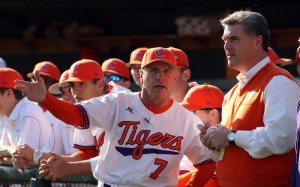 In his 22 years as the head coach at Clemson, Jack Leggett led the Tigers to 955 wins, 43 wins per season. He led the Tigers to top four finishes at the College World Series in 1996, 2002 and 2010, the only top four CWS finishes in Clemson history. (File photo/The Clemson Insider)

Leggett is the only head coach in this year’s class. In 2006, Clemson won the ACC Championship under Leggett and advanced to the College World Series as the No. 1 overall seed in the field. The Tigers advanced to the 2007 Super Regionals and in 2009 he led them back to the Super Regional Round of the NCAA Tournament. In 2010 he took Clemson back to Omaha and the College World Series for a sixth time.

Leggett led the Clemson baseball program for 22 years and took the Tigers to 21 NCAA Tournaments, which landed him into the American Baseball Coaches Association Hall of Fame in 2014.

Seven times Clemson had a top 10 final ranking under Leggett, including three years when the Tigers reached the Final Four of the College World Series. He took the Tigers to the CWS six times overall.

Leggett joined current golf coach Larry Penley as only coaches in Clemson history to be inducted into a National Hall of Fame while still an active coach.

Clemson ranked as the seventh winningest baseball program in the nation during his 22 years at the helm. His six trips to Omaha tied for ninth most in the nation during that time. Of his 955 wins, 244 (26 percent) were against top 25 teams. Also had 135 wins over Top 10 teams.

By the way, I would be remiss if I did not mention my good friend Bill D’Andrea, who was also named as a member of the 2020 Class. Billy D, as he is affectionately called at Clemson, was a senior administrator at Clemson in those days of Spiller, Booker and Leggett. He played a huge role while running IPTAY.

I had the pleasure and the opportunity to get to know all four of these men. They are great Clemson men. They all made my job fun and easy to do in those days. And it is great to see them all go into the Clemson Athletic Hall of Fame together.