Clemson dispensed an offer Monday to the nation’s top-ranked linebacker in the 2022 recruiting class.

Blessed and honored to receive an offer from Clemson university!!!🐅🧡🤍 pic.twitter.com/BRPDz58btd 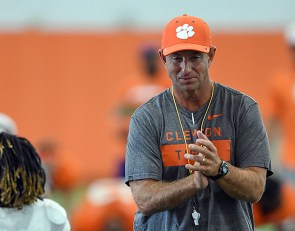 With the NCAA set to lift the dead period at the end of May and allow in-person recruiting to resume beginning June 1, Bradenton (Fla.) IMG Academy four-star defensive end Jihaad Campbell has several visits (…)

Clemson extended a new offer to a class of 2022 prospect Thursday night. T.L. Hanna (Anderson, S.C.) linebacker Fletcher Cothran announced the offer from the Tigers via Twitter. Cothran told The (…)

The crew from the NFL Network’s Path to the Draft broke down who is the better prospect coming out of college … LSU’s Joe Burrow or Clemson’s Trevor Lawrence. Burrow was the No. 1 overall pick by the (…)

All Division I sports will return to their regular recruiting calendars beginning June 1. The Division I Council approved the return to recruiting activities during its video conference this week. (…)

The 17th-ranked Clemson softball team will host Boston College in a four-game series this weekend at McWhorter Stadium in Clemson. Game 1 of the series will be Friday at 5 p.m. SERIES SETUP (…)

All Division I student-athletes will have a one-time opportunity to transfer and compete immediately beginning in the 2021-22 academic year, if legislation adopted by the Division I Council is ratified by (…)

Tigers travel to No. 25 Miami this weekend

Former Clemson running back Travis Etienne announced a big deal on social media on Thursday. The ACC’s all-time leading rusher announced he is working with Panini America. Panini is the world leader in (…)

Trevor Lawrence’s words in a recent Sports Illustrated story were one of the main topics on ESPN’s “Get Up” show Thursday morning. The former Clemson quarterback sat down for an interview with SI and, (…)