Clemson is showing interest in a four-star edge rusher from the Volunteer State who has seen his recruiting stock steadily rise this year.

Keaten Wade of Summit High School in Spring Hill, Tenn., told The Clemson Insider he has been staying in touch on a consistent basis with Clemson defensive ends coach and area recruiter Lemanski Hall, who has expressed to Wade that he is impressed by his film.

The Clemson Insider recently spoke with Wade, a class of 2022 recruit who said he and Hall have discussed the subject of a potential offer from the Tigers.

“He said just be patient because they offer guys slowly and make sure they’re getting the right guy and evaluating very thoroughly,” Wade said. “He told me that, so he told me just to be patient and I’m one of the guys he’s evaluating.”

Hall has made a strong impression on Wade as the two have gotten to know each other.

“He’s a great guy that asks great questions and wants to get to know you and talks abut anything and is open and just a great a person,” Wade said. “I feel like our relationship is good and will get even better.”

Wade’s recruitment really started to ramp up this spring when he received offers from Oklahoma, Penn State, Arizona State, South Carolina and Mississippi State among others. In-state Tennessee pulled the trigger on an offer to Wade in February following offers from Texas A&M and Ole Miss in January. Kentucky and LSU both offered him toward the end of last year.

Along with Clemson, Wade has been keeping in regular contact with schools such as Tennessee, Kentucky, North Carolina, Arizona State and Northwestern.

Although Wade’s recruitment is wide open and there are a lot of schools he likes, the 6-foot-4, 215-pound rising junior named a couple of the programs that are standing out to him right now.

“All of the schools are intriguing,” he said, “but some of the ones that are in close contact and I like are Arizona State and Kentucky, but most of the schools seem very interested in me and want me to stay in contact with them.”

Wade is taking the process slowly and plans to rely on his faith to help him figure out which school is the right fit and when to make his decision.

“I’m probably going to wait a little more through the year to see who contacts me,” he said. “Just going to be patient and see how God guides me.”

An offer from Clemson, if Wade scores one in the future, would vault the Tigers into serious contention for the standout outside linebacker/defensive end.

“Clemson would be one of the biggest offers to get for me next to LSU,” he said. “But definitely pull into strong consideration to go to school there, and an offer from them means a lot!”

Wade is the third-best prospect from Tennessee, No. 14 outside linebacker and No. 167 overall prospect in the 2022 class according to the 247Sports Composite rankings. He is a versatile player off the edge who can line up in a three-point stance or get after the passer in a stand-up role.

As a sophomore last season, Wade tallied 103 total tackles, 22.5 tackles for loss, 11.5 sacks, one forced fumble and two fumble recovers. He also saw plenty of action on offense, rushing for 1,152 yards and 15 touchdowns (7.0 yards per carry) while also catching 14 passes for 172 yards and a couple more scores. 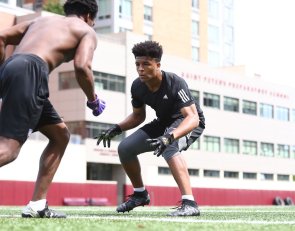