Alabaster (Ala.) Thompson defensive end Peter Woods is one of the top young players in the country, ranked as the nation’s No. 2 prospect in the 2023 recruiting class regardless of position by 247Sports.

Woods, a 6-foot-3, 250-pound rising sophomore, has offers from close to 30 major college football programs already and feels blessed to be in the position he is in.

“The recruiting process is going great for me right now!” Woods told The Clemson Insider. “It’s kind of slowed down because I’m mostly focused on perfecting my craft and getting a ring with my team, but it’s really a blessing to already be in a position like this!”

Clemson doesn’t offer recruits as young as Woods, contrary to many other programs, but he said the Tigers are “showing a lot of interest” early in the process.

“They said I play well beyond my years and know how to use my hands already,” Woods said.

The interest between the Tigers and Woods is certainly mutual.

“I’m high on Clemson right now!” he said. “They’re in the conversation every year for the national championship and have a great history of developing players especially at my position.”

“Clemson’s offer would mean a lot to me,” he said, “and they would definitely be in the conversation for later decisions.”

To this point in the process, the only schools Woods has been able to visit are Alabama and Mississippi State.

“The plan was to go to a lot more before COVID-19 struck,” he said, “but when the dead period is over, I’ll definitely try to get to all the schools who have shown interest.”

Woods says he is “just taking everything in” at this juncture of his recruitment and doesn’t have any early favorites or a timeline for his future decision. He does, however, know what he is looking for in his ideal school of choice as he goes through the process.

“I want to not just go to a school that’s going to prepare me for the next level in football, but life after football,” he said. “Also, a place where I know the staff and medical staff really cares about me and my family’s wellbeing.”

Woods checks in as the No. 1 prospect from Alabama, No. 2 strong-side defensive end and No. 2 overall prospect in the early 247Sports rankings for the 2023 class.

As a freshman on varsity last season, Woods was credited with 54 total tackles, 15 tackles for loss and seven sacks along with seven quarterback hurries. He helped his Thompson High School team win the 2019 Alabama Class 7A state championship. 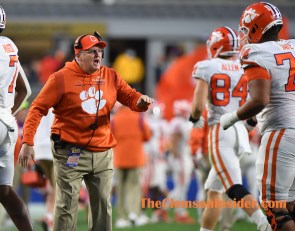