The recruiting process has heated up and been a little bit hectic for Lakeland (Fla.) four-star Gabriel Dindy — one of the top defensive line prospects in the 2022 class — since college coaches were allowed to start directly contacting him on Sept. 1 per NCAA rules.

Dindy, a top-50 national prospect regardless of position according to multiple recruiting services, cited just some of the schools that have reached out to him since the calendar turned to September.

“Clemson, Oklahoma, Texas A&M and USF and so on,” he said.

Clemson defensive tackles coach Todd Bates is Dindy’s primary recruiter for the Tigers and has been communicating with the 6-foot-3, 275-pound junior.

“He just tells me about the school and stuff,” said Dindy, who received a scholarship offer from Clemson in July.

Dindy added that his relationship with Bates is “pretty good” right now, and Clemson is “pretty high up” on his list of 20-plus offers at this point in the process.

A native of Louisiana, Dindy’s offer list also includes Oklahoma — where both of his parents are from — along with schools such as Florida, Florida State, Miami, Texas A&M, South Carolina, Tennessee and others.

Dindy doesn’t plan to make his college decision until sometime during his senior year in 2021 but knows the two most important elements he is looking for in a school as he goes through the process.

“Good coaching staff and a great environment,” he said.

Dindy is ranked as high as the No. 3 defensive tackle and No. 33 overall prospect in the 2022 class by the 247Sports Composite, while ESPN also considers him one of the top 50 prospects in the country for the next recruiting cycle (No. 42 overall). 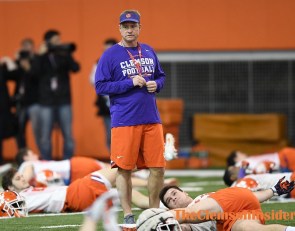 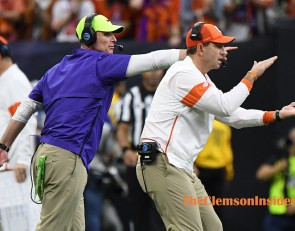