Top-ranked Clemson dominated the first half against outmatched FCS foe The Citadel and carried a 49-0 lead into the halftime break.

The disparity between the two teams certainly showed on the stat sheet. The Tigers finished the first half with 298 yards of total offense and held the Bulldogs to just 37 yards.

Clemson gained 120 yards on the ground behind a stout half from running back Travis Etienne. The senior finished the half with 68 yards on eight carries, including runs of 28 yards and 22 yards. The Tigers rushed three backs including Darien Rencher who ranked second behind Etienne with four carries for 28 yards.

The Tigers passed for 178 yards behind a near perfect start from Trevor Lawrence. The junior finished the half eight for nine for 168 yards and three touchdowns with a 17-yard touchdown to Frank Ladson, a 44-yard toss to Amari Rodgers and a 55-yard pass to Ladson.

Backup quarterback D.J. Uiagalelei led a pair of scoring drives as well and completed two-of-three passes and ran twice for seven yards and the first two touchdowns of his Clemson career.

Ladson led all receivers with three receptions for 87 yards and a pair of touchdowns (17 yards and 54 yards). Cornell Powell hauled in two passes for 25 yards and Amari Rodgers caught a touchdown pass for 44 yards.

On defense, Clemson shut down the triple option. Nyles Pinckney recorded three tackles and had a tackle for loss. Baylon Spector had two tackles and a half tackle for loss. Myles Murphy had two tackles for loss and forced a fumble that James Skalski returned for a 17-yard touchdown. Trenton Simpson recorded the Tigers’ only sack of the first half.

Clemson looks to continue the onslaught in the second half with a lot more action for the young players on the roster. 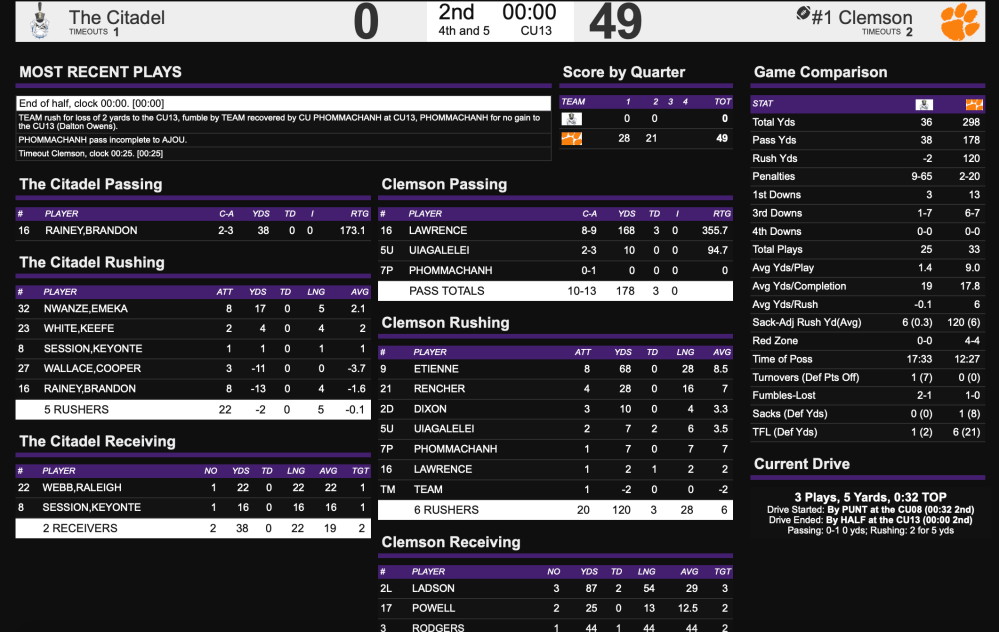