Tayquon Johnson admits he experienced some jitters two Saturdays ago before No. 1 Clemson’s season opener at Wake Forest.

It was Johnson’s first game as an offensive lineman after transitioning from the defensive line during the 2020 offseason, so naturally there was a little bit of an adjustment period when he first took the field. But as the game progressed, Johnson calmed down and became more comfortable at his new position.

“My very first game at Wake Forest, I was very nervous for the first time,” Johnson said on Monday. “But as the game started to go on, I started to settle down and just hone in on my technique and my plays.”

Recruited by the Tigers as a defensive tackle out of Williamsport, Md., Johnson appeared in three games while redshirting as a true freshman last season before making the position switch this spring.

Overall, Johnson says the transition has been smooth and “really good” for him, though there have of course been some challenges along the way like learning the playbook and picking up on technique.

However, his experience at and knowledge of the defensive tackle position has helped him adjust to being an offensive lineman because he has a good feel for what the opposing D-lineman is going to do at the snap of the ball.

“I would say the big emphasis that you have to work with (for) both is keeping your hands inside and being the first to get inside the pads. Transitioning from both, it’s very different technique and a very different skillset that you’ll need for both, and I would say your hands are the key that are going to help you throughout transitioning over. So, that’s something that I still have to work on is my hands, getting inside and just getting them high and stuff like that.”

The relationships Johnson has built with his former position mates on Clemson’s defensive line make for interesting head-to-head battles when he faces off against them every day in practice, and a friendly rivalry of sorts has developed.

“I would say it’s definitely competitiveness that goes on,” Johnson said. “Especially moving over, we joke about it all the time. I always ask them, ‘So we’re not friends no more?’ and they’re like, ‘Nah, not while we’re on the practice field.’

“As far as relationships go, I wouldn’t say anything has changed. We definitely compete every day on the practice field against each other. So, I mean, it’s very fun going against the guys who I practice with the majority of the time.”

Johnson — listed on Clemson’s depth chart as the third-string right guard right now behind starter Will Putnam and backup Blake Vinson — played 15 snaps in his offensive line debut against the Demon Deacons before logging 24 snaps in the Tigers’ shutout win over The Citadel at Death Valley last Saturday.

A couple of Johnson’s primary focuses moving forward this season are staying in good shape and making sure he maintains the optimal weight to be able to perform at his best on Saturdays.

“As far as weight management, it’s definitely a big issue that I have to hone in on is making sure I’m eating the right things on my off days,” said Johnson, who is listed at 6-foot-2, 340 pounds. “I’m eating the right things once again and keeping my conditioning up to combat overweightness and stuff like that. But I definitely try to monitor my weights to make sure that I’m being able to play efficiently at my weight.” 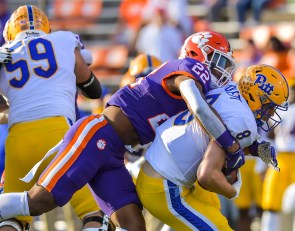 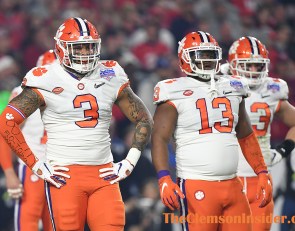 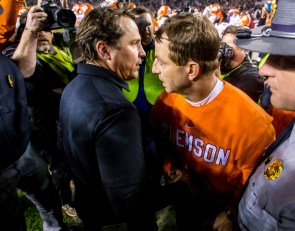