After Week 3 of the NFL season, the teams that haven’t won a game yet are entering the conversation to possibly take Clemson quarterback Trevor Lawrence with the No. 1 overall pick in the 2021 NFL Draft seven months from now.

There are six teams that have started the season with an 0-3 record, including the Atlanta Falcons, Denver Broncos, Houston Texans, Minnesota Vikings, New York Giants and New York Jets.

ESPN NFL analyst Ryan Clark was a guest on SportsCenter on Wednesday morning and weighed in on which of those teams he believes are the current frontrunners to “Tank for Trevor,” who is widely viewed as a generational talent and a virtual lock to be the first player off the board in next year’s draft.

Clark pointed to the Broncos and Jets – one of whom will be 0-4 after their Thursday night matchup this week – as the two teams he feels are mostly likely to land Lawrence as things stand now.

“When you look at the way the Denver Broncos are depleted offensively and defensively, missing (linebacker) Von Miller, obviously you have the quarterback Drew Lock out. And also now, you go to the New York Jets, and they just can’t do anything right. When you watch this team, they started the season out bad against the Buffalo Bills, and they’ve only gotten worse in the last two weeks where their offense was actually outscored by the Indianapolis Colts’ defense this weekend in their game.

“So, when you look at these two teams, I don’t see any hope in the future for them.”

Clark questions, though, if either team would even select Lawrence if they come away from this season with the No. 1 pick due to their current quarterback situations.

The Jets took Sam Darnold No. 3 overall in the 2018 NFL Draft, while the Broncos picked up Lock in the second round in 2019.

While it is uncertain who will end up with Lawrence next year, there is no doubt he is coveted by fan bases of bad NFL teams. Practically every Sunday, Lawrence is a trending topic on Twitter and other social media platforms as fans clamor over him.

Lawrence was asked about that this week and says he does his best not to pay attention to all the buzz, but being on social media, he admits that is difficult to do.

“I try to ignore it as much as possible,” he said. “Obviously if you’re on social media at all, you can’t help but see some of it. But it’s just funny. It’s a new team every week, so I don’t think there’s any real insight of what’s going to happen. It’s a long season. It’s only been three games in the NFL. You just don’t know, but it’s kind of interesting seeing all the stuff that kind of comes to me. It’s just kind of funny, but I don’t take it too seriously.”

Lawrence knows there is a long way to go before the 2021 draft and a lot can happen before then, so he isn’t dwelling on his NFL future but instead, in the words of Dabo Swinney, trying to be “great where his feet are.”

“I know in this position, you can’t really predict where you’re going to go, what’s going to happen,” Lawrence said. “You just don’t know, so all I can do is enjoy my time while I’m here, perform the best I can and just enjoy where I’m at right now. We’ll see next year what happens.” 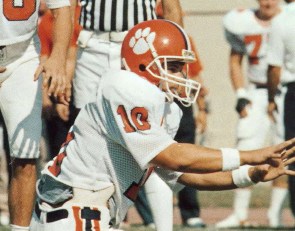