Braden Galloway definitely understands the history of success at the tight end position at Clemson.

A long list of NFL stars, All-Americans and All-ACC performers such as Dwayne Allen, Jordan Leggett, Michael Palmer, John McMakin and Brandon Ford had great careers representing the Tigers. But the bar for the position was set by a local man who was Clemson’s first two-time First-Team All-American, he was a first-round draft pick, won two Super Bowls in the NFL and was selected as they only tight end on the ACC’s 50th Anniversary Team in 2003.

Bennie Cunningham is arguably the greatest tight end to ever play at Clemson, and no one knows his legacy more than Galloway, who went to the same high school as the Clemson legend in nearby Seneca, S.C.

Galloway never got to know Cunningham, who passed away on April 23, 2018, but he knows his fellow Seneca Bobcat paved the way for success at Clemson and in the NFL for tight ends. 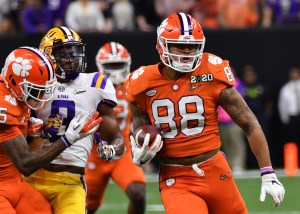 Clemson’s Braden Galloway breaks free for a 46-yard gain against LSU in last year’s national championship game against LSU. Galloway said Thursday he is very thankful for the legacy the late Bennie Cunningham left at Clemson for all tight ends to follow. (USA TODAY Sports)

“I definitely recognized the legacy,” Galloway said Thursday on the Packer & Durham Show on the ACC Network. “Growing up in Anderson and then moving to Seneca, whenever I committed to Clemson a lot of people talked about Bennie Cunningham. I didn’t know him personally, but I do know he had a great career here and then later on with the [Pittsburgh] Steelers.”

Before Allen and Leggett broke all of his Clemson records this past decade, Cunningham was the most decorated tight end in Clemson history. Cunningham (6-5, 250) was ahead of his time for a tight end, as he used his size and speed to become one of the greatest tight ends in ACC history.

The Seneca native caught 64 passes for 1,044 yards and 10 touchdowns in his career, all Clemson records for a tight end at the time. He became Clemson’s first consensus All-American, regardless of position, in 1974 and then the Tigers’ first two-time First-Team All-American the following year.

In 1976, Cunningham was taken in the first-round of the NFL Draft by the Pittsburgh Steelers and by 1978 he was starting on a team that had already won two Super Bowls. The 6-foot-5, 250-pound athlete became the second former Tiger to win two Super Bowls, as he helped the Steelers win World Championships in 1978 and 1979.

When he retired from football, Cunningham returned to the Clemson area, becoming a career guidance counselor at West-Oak High School in Oconee County.

“I am definitely thankful we was able to lay that foundation for us,” Galloway said.