As his father ‘KT’ smiles down, Nolan Turner proves he’s not 'a charity case’

As his father ‘KT’ smiles down, Nolan Turner proves he’s not 'a charity case’

It is crazy how things work out.

Following Clemson’s loss to Alabama in the 2016 National Championship Game, Mackensie Alexander, Jayron Kearse, T.J. Green and Adrian Baker all left the team. Alexander, Kearse and Green all went to the NFL after their junior years, while Baker transferred.

“I had no idea those guys were leaving until after the game,” Clemson head coach Dabo Swinney recalled on his call-in show Monday night. “We were not recruiting DBs. Literally, after that game we went and got K’Von [Wallace], Isaiah Simmons, Trayvon Mullen, and Nolan Turner in a two-week span.

Wallace, Simmons and Mullen are all playing in the NFL now, while Turner is fifth-year senior and is the Tigers’ starting free safety.

In his career at Clemson, Turner has turned into one of Clemson’s most dependable players. After being redshirted in 2016, he has played in each of the last three seasons, while becoming one of the more reliable players on defense.

He enters this week’s game against No. 7 Miami with 136 career tackles and four interceptions. Three of those interceptions have come in the postseason, while the fourth came in last week’s win over Virginia.

“That is such a lesson because this is such a developmental game… We beat nobody to get Nolan. I mean we beat nobody,” Swinney said.

Before Swinney called and offered Turner a scholarship, he was headed to Alabama as a preferred walk-on. Turner’s dad, Kevin, was a star fullback at Alabama and helped the Crimson Tide win the 1992 National Championship. 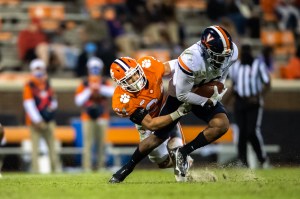 His best friend on the team was no other than Dabo Swinney. The two became close after Swinney walked on at Alabama in 1988. They were in each other’s wedding, they worked together for a little while and where there when their kids were born.

“God orchestrated (the four defensive backs leaving) and there is no doubt in my mind, zero, one of the greatest moments for me was to be able to call KT and tell him that I was going to fly in and I had a scholarship for Nolan,” Swinney said.

At the time when Swinney offered Turner the scholarship, Kevin was just a shell of his former self. Years after playing in the NFL he was diagnosed with ALS. Turner was just 11-years old then.

Like his dad, Turner became a star football player in high school, but he had not received any offers from major schools. However, during his senior year, Swinney took a look at Turner’s tape, just to see how he was doing. The Clemson head coach was amazed with what he saw, so, he took the tape to defensive coordinator Brent Venables and asked for his thoughts.

“I told him early on he was going to hear he is ‘a charity case’ and ‘Coach played with your dad,’ and blah, blah, blah. ‘You are going to have to have thick skin to push through those types of things and believe in who you are. I am telling you right now you would not get this opportunity if you were not good enough.’”

Swinney says Turner has turned into one of the best football players on the team. He is smart and he is always where he needs to be.

“He is not perfect… He is a hard guy to fool,” the Tigers’ head coach said. “He is just so locked in and so disciplined. That is why he gets his hands on balls and things like that. I am really proud of him and he has become a great leader.”

Turner went from a shy and insecure kid when he first got to Clemson, to a starter on the No.1-ranked team in the country.

“Since he was eleven, he dealt with the situation involving his dad. It was a very, very tough thing for him to watch his dad go through the ALS process all the way until the end,” Swinney said. “There is no doubt in my mind that God orchestrated this. We buried KT on Easter Sunday and since then Nolan has been here.

“He has been a part of two national championships against Alabama. He looks just like his dad. He has come out of his shell. He is so well respected, and he has really become a leader and is just a beautiful story. It really is. I try to look at him through KT’s eyes. I know KT is smiling upon him and is just so proud of the man that he is. I see so much KT in him. They are different, but he has that same quiet confidence now that you saw in KT as he developed at Alabama.”