The Clemson quarterback is considered to be the top prospect in next April’s NFL Draft and with the New York Jets being the only winless team remaining in the NFL, many in the New York media believe the Jets will take Lawrence with the No. 1 overall pick.

Clemson has never had a player go No. 1 overall in a draft, and only two of its former quarterbacks have ever gone in the first round. Steve Fuller went No. 23 overall to Kansas City in the 1979 NFL Draft, while more recently Deshaun Watson was selected No. 12 in the 2017 Draft.

Now in his fourth season, Watson has become one of the young stars in the NFL, leading Houston to the NFL Playoffs in each of the last two seasons.

Based off his style and same level of success, Swinney was asked what Lawrence might do that is different than what Watson did while he was at Clemson.

They are both winners, too. Watson was 32-3 as the Tigers’ starting quarterback from 2014-’16. He led Clemson to the 2016 National Championship and played for it the year before. 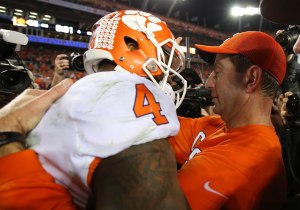 Lawrence, who is getting close to breaking some of Watson’s records at Clemson, is 30-1 as the Tigers’ starter. He led Clemson to the 2018 National Championship as a freshman and last year, he had the Tigers back in the national title game.

Clemson, who will play Syracuse on Saturday at Death Valley, is currently 5-0 and 4-0 in the ACC and is ranked No. 1 in the country.

“I didn’t know I would ever get to coach another guy like Deshaun that just loved to prepare and was so focused and so focused on being great that he did not get distracted by other things,” Swinney said. “Trevor and Deshaun are the exact same.

Swinney said the differences in the two quarterbacks is simple, Lawrence is taller and has longer hair than Watson.

“Trevor does not get the credit for his athleticism. There is nothing Deshaun can’t do athletically and running that Trevor can’t do,” Swinney said. “I think you saw that in the bowl game last year. When he took a draw against a great football team (67 yards). He can run. He and Deshaun can run. There are really not any differences, to me, other than just their size and Trevor has long hair and Deshaun has short hair.

“They are great human beings, both of them.”

Clemson has been showing a lot of interest lately in a defensive lineman from the same high school that sent an offensive lineman to the Tigers last year. Raleigh (N.C.) Leesville Road four-star (…)

Clemson’s dynamic duo in the backfield feels right at home so far in their new NFL environment after this weekend’s rookie minicamp. Trevor Lawrence and Travis Etienne were both drafted in the first (…)

This past week during rookie minicamp Travis Etienne found himself in an unusual position. The 25th overall pick spent the majority of his time during the Jaguars’ camp at wide receiver instead of running (…)

Preseason magazines will not hit the newsstands for a few more weeks. However, one publication released its post-spring top 25 preseason poll on Monday. USA TODAY released a post-spring practice top 25 poll (…)

Huge Alabama OL ready to show off talent at Clemson

Clemson will welcome a massive, yet athletic, offensive lineman from the Yellowhammer State to campus for the first time next month. Pike Road (Ala.) High School’s Vysen Lang, a class of 2023 prospect with (…)

NBC reporter and writer Mike Florio broke down the crazy chaos that is the Deshaun Watson sexual assault civil cases in Houston. Last week, the attorney for the 22 women suing the Houston Texans quarterback (…)

Former Clemson star considered one of the top rookies to succeed