Swinney reflects on Uiagalelei’s recruitment, when he realized the Tigers had ‘a real shot’

Swinney reflects on Uiagalelei’s recruitment, when he realized the Tigers had ‘a real shot’

Clemson defensive coordinator Brent Venables was out on the recruiting trail in California to see a linebacker target when he was told about another prospect from the Golden State – five-star quarterback D.J. Uiagalelei.

Jason Negro, Uiagalelei’s head coach at St. John Bosco High School in Bellflower, Calif., spoke to Venables about Uiagalelei and gave him a heads up that the young phenom recruit was highly interested in Clemson’s program.

While Uiagalelei held offers from virtually every major program across the country at the time, he did not have one from Clemson – the Tigers don’t just freely hand out offers, and they don’t invest time or resources into recruiting a prospect if they don’t feel like they have a real chance or there isn’t genuine interest on the prospect’s end, especially if they are from the West Coast or another faraway state.

But in Uiagalelei’s case, Clemson very much appealed to him, and Negro let Venables know that.

“We don’t waste a lot of time in recruiting. We’ll check on every great player, but we don’t like to practice recruiting, that’s for sure,” Clemson head coach Dabo Swinney said this week, reflecting on Uiagalelei’s recruitment. “But in D.J.’s case, Brent was actually out recruiting a backer, and the coach, Coach Negro there at Bosco, what a great guy he is. I think he said something to Brent like, ‘Hey, I got this quarterback, he’s pretty dadgum good.’ And he probably had 70 offers at the time. He’s got all these offers, but Clemson hadn’t offered him. That’s the other thing – we don’t just offer guys, especially at that position, without really knowing much about them.

“But Coach said, ‘He really likes Clemson.’ So, he reaches out to (Clemson quarterbacks coach Brandon) Streeter – I think Brent gave him the number – he reaches out to Streeter, and Streeter looked at him and was like, ‘Yeah, he’s a great player, but listen, would he really be interested in Clemson?’ And Coach was like, ‘Hey, he loves Clemson. I’m just letting y’all know. He loves Clemson and he really wants y’all to recruit him.’”

So, that is exactly what the Tigers did. Streeter traveled to St. John Bosco to check out Uiagalelei and learn more about him, and Uiagalelei returned the favor when he made a trip to Clemson to participate in one of Swinney’s high school football camps. 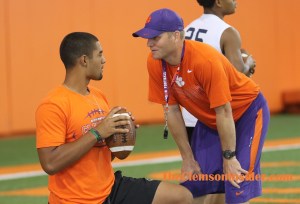 It was at the Swinney Camp in June 2018 when Uiagalelei received what he called his “dream offer” from Clemson, and when Swinney began to feel that his program had a legitimate chance to land the rising star signal-caller.

“Once we started talking to him, you can just talk five seconds to D.J. and tell how honest and how sincere he is,” Swinney said. “He was very sincere from the get-go why he was interested in Clemson, etcetera, and so then he came in the summer to our camp. So, it was probably that summer when I first realized, hey, we got a real shot at this kid.”

Uiagalelei did not commit to the Tigers on the spot, as he wanted to do his due diligence with the recruiting process. But ultimately, on his mother’s birthday on May 5, 2019, the nation’s top-ranked pro-style quarterback coming out of high school announced his verbal pledge to Clemson over runner-up Oregon and more than 30 other offers.

“Just a special, special talent, and he told me pretty early that he felt like Clemson was where he belonged but was going through the process and wanted to make sure,” Swinney said. “He’s a very intentional young man. So, he’s special. Really, really glad we got him, that’s for sure.”

Swinney recalled how blown away he was by Uiagalelei’s arm talent the first time he saw Uiagalelei throw at the camp.

Uiagalelei’s arm strength was almost too impressive – dangerous, even.

Swinney remembers how his staff had to change up the way they did things at the camp in order to avoid Uiagalelei’s rocket of a right arm from injuring any of the receivers attempting to catch passes from him.

“In camp, you get guys and you’re lined up and we don’t have helmets on, and we’ve got fifteen hundred kids there,” Swinney said. “And you try to get them by class, the seniors and juniors, and D.J was a junior. Man, I quickly realized – I went over, Jeff Scott was here, and I was like, ‘Hey, somebody’s going to get hurt. He can’t just throw the ball to anybody.’ It was just different. He’s got a cannon, and I think he was trying to really show it off in front of us when he got here.”

“Those kids, it was a tough sight to watch, some of those guys trying to catch those balls,” Swinney added, smiling. “So, my first thought was I better readjust this wideout line here to give us a little better chance. But just from the get-go, his poise and his demeanor, his personality … But his gift – he’s got a gift. There’s not many people who can throw the football like he can.”

Clemson has been showing a lot of interest lately in a defensive lineman from the same high school that sent an offensive lineman to the Tigers last year. Raleigh (N.C.) Leesville Road four-star (…)

Clemson’s dynamic duo in the backfield feels right at home so far in their new NFL environment after this weekend’s rookie minicamp. Trevor Lawrence and Travis Etienne were both drafted in the first (…)

This past week during rookie minicamp Travis Etienne found himself in an unusual position. The 25th overall pick spent the majority of his time during the Jaguars’ camp at wide receiver instead of running (…)

Preseason magazines will not hit the newsstands for a few more weeks. However, one publication released its post-spring top 25 preseason poll on Monday. USA TODAY released a post-spring practice top 25 poll (…)

Huge Alabama OL ready to show off talent at Clemson

Clemson will welcome a massive, yet athletic, offensive lineman from the Yellowhammer State to campus for the first time next month. Pike Road (Ala.) High School’s Vysen Lang, a class of 2023 prospect with (…)

NBC reporter and writer Mike Florio broke down the crazy chaos that is the Deshaun Watson sexual assault civil cases in Houston. Last week, the attorney for the 22 women suing the Houston Texans quarterback (…)