Top-ranked Clemson played another rough first half and fell behind 23-13 to No. 4 Notre Dame at the break.

A pair of turnovers in the second quarter gave the Fighting Irish 10 points in 3:12.

But the Tigers managed to put points on the board with a 45-yard field goal off the foot of B.T. Potter with 1:09 to play in the half that kept the deficit manageable on the way to the locker room.

A major key to the game for the Irish was controlling the line of scrimmage. Notre Dame held the Tigers to five yards rushing in the first half and rushed for 144 including a 65-yard run for a touchdown on the first play of the game by Kyren Williams. Williams carried the ball 10 times for 102 yards and a touchdown.

Clemson backup quarterback D.J. Uiagalelei looked impressive in the first half. He completed 11-of-17 passes for 220 yards and a touchdown. But a fumble by Travis Etienne that was returned for a touchdown and a fumble by Amari Rodgers that resulted in an Irish field goal.

Another benchmark stat was third down conversions. Notre Dame converted on 5-of-9 attempts and held the Tigers to 2-of-6.

Amari Rodgers led the way for Clemson’s receiving corps with four catches for 88 yards. Cornell Powell caught the Tigers’ only touchdown on a 53-yard pass from Uiagalelei.

Clemson needs to flip the stat sheet at the line of scrimmage, limit turnovers and get its defense off the field on third down if wants to change the outcome of the game. 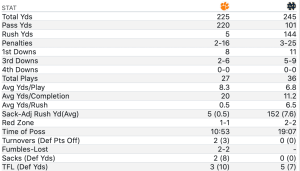