Powell plays with mother on his mind

Powell plays with mother on his mind

When Clemson wide receiver Cornell Powell takes the field each Saturday, he competes with his mother in mind.

Powell’s mom has always been his biggest fan and supporter, and she is the source of his work ethic and motivation.

A redshirt senior management major, Powell works so hard – whether it be on the field or in the classroom – so that one day his mother might no longer have to.

“First of all, I want to make her proud, and if I can do that in any way I can, I want to do it,” Powell said to reporters this week. “And just having her there by my side each and every game, home or away, it’s just amazing and it just shows you how great of a mother she is. She’s willing to go out of her way still to this day to make sure that I’m happy, that I have everything I need. So, going out there and making her proud, and trying to make sure that I do whatever I can to retire her one day, it’s definitely on my mind when I go out there and play.”

Stephanie Powell raised both Cornell and his older brother as a single mother and did whatever it took to provide for her sons. She worked a full-time job, Monday through Friday, 8 a.m. to 5 p.m., as an administrative support specialist at ECU Physicians in Greenville, N.C. – and sometimes worked a part-time job on top of that.

Cornell says growing up, seeing his mom endure the daily grind in order to take care of him and his brother, is a big reason behind his work ethic and desire to be the best he possibly can in everything he does.

She is why Cornell hopes to make it to the NFL, so he can use his paychecks to give back to her, make sure she is taken care of and never has to have a job again.

“She never quit. She never gave up. She never made excuses, and I always had what I needed and even more at some times,” Cornell said. “So, just seeing that day in and day out, that really motivated me and it’s really what’s behind my drive and what’s behind my mindset and my attitude. I attack everything, I want to be the best at everything I do. Whether we’re running wind sprints or we’re doing reps of 25, I want to try to be the best, and that comes a lot from her.” 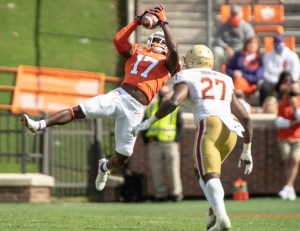 Powell has been one of the fourth-ranked Tigers’ best receivers this year. The former four-star prospect from J.H. Rose High School in Greenville, N.C., ranks third on the team in receptions (31) and receiving yards (418) behind only Amari Rodgers and Travis Etienne, respectively, while he is tied for third with three touchdown catches.

In the last two games against Notre Dame and Boston College, Powell racked up a combined 267 yards on 17 receptions, and he has scored a touchdown in three of the last four games.

However, it hasn’t always been easy for Powell during his Clemson career. While he is starting to see the fruits of his labor now, it has been a long time coming and required five years of hard work and patience for him to get to this point.

After arriving on campus in 2016 following a high school career in which he amassed 4,301 receiving yards and 68 touchdowns, Powell saw limited playing time and production over his first four years while playing behind a number of current NFL wideouts such as Mike Williams, Hunter Renfrow, Ray-Ray McCloud and Tee Higgins.

Powell, who redshirted as a third-year player in 2018, could have decided to pack up his things and transfer to another program with less talent where playing time could be more easily had. But instead, he chose to stay the course at Clemson, compete with the best of the best and earn everything he is getting now – and his mom is a big reason why he didn’t give up.