One of the Clemson football program’s top wide receiver targets in the 2022 recruiting class hails from the Palmetto State in four-star Adam Randall of Myrtle Beach (S.C.) High School.

Randall, a 6-foot-3, 200-pound junior, is one of just two receivers that the Tigers have offered for the next recruiting cycle. He has collected over 20 total scholarship offers and helped Myrtle Beach High reach the semifinals of the Class 4A state playoffs this year. Despite being banged up in a couple of games, Randall recorded 738 receiving yards and nine touchdowns in the first eight games of his team’s campaign.

“I’ve played pretty well, but just trying to live up to the standard that has been put out there for me over the offseason,” Randall told The Clemson Insider recently, reflecting on his season. “Getting all these offers and these accolades, me wanting to live up to that hype, and I think I have pretty much.”

As for Clemson’s 2020 season, Randall likes what he has seen from the third-ranked Tigers (8-1, 7-1 ACC) as they continue their push for a sixth consecutive conference title and sixth straight appearance in the College Football Playoff.

“For the most part, they’ve been pretty much on track from what they’ve been going through in the past five years in their program, just being dominant and dominant in the ACC,” Randall said. “So, they’ve been on track, and I think that they’ll have a good matchup coming up with them and Notre Dame here again once they get back into the ACC Championship.”

Randall, who received an offer from Clemson on Sept. 1, recently spoke with head coach Dabo Swinney.

“Me and Coach Swinney had a good conversation about me coming to Clemson and him just letting me know what it would do for me personally and as a football career side,” Randall said. “So, he can sell anything to anybody, and he has a very good personality, and he seems like a guy that I really would want to play for.”

Randall also continues to stay in contact with Clemson receivers coach Tyler Grisham. According to Randall, they typically communicate two or three times a week.

Along with Clemson, South Carolina is one of the schools that Randall has been strongly considering, though he admitted the program’s decision to part ways with former head coach Will Muschamp in mid-November does impact his recruitment as far as the Gamecocks are concerned.

“It kind of does, just me not knowing who will be there in the next couple years,” Randall said. “It gives me a little bit of concern because after this year, a new guy can come in there and he can get rid of everybody and not even want me as a recruit. But just talking to the coaches right now, hopefully the guy that comes in there and wins the job keeps the coaches that they have there. But I mean, it does impact my opinion on USC and going there just because it’s kind of uncertain who will be there once I get up there.”

The best thing the Gamecocks have going for them in Randall’s recruitment, he said, is his relationship with their true freshman quarterback, Luke Doty, who made his first career start in South Carolina’s 45-16 loss to then-No. 9 Georgia last Saturday.

Doty played with Randall at Myrtle Beach, and Randall says the thought of teaming up again with his good friend in Columbia is appealing to him.

“Me and him talk about every day and we talk about life stuff and football stuff all the time,” Randall said. “So, catching passes from Luke would be great at this point in my career, and it’s always something I would have to look into because playing with Luke is great.”

Clemson has a relationship working in its favor, as well, in the form of Clay Swinney — Dabo’s youngest son whom Randall formed a bond with while participating in Dabo’s football camp before his ninth-grade year.

“Me and Clay have a good friendship. We talk a lot,” Randall said. “So, me and him have a good relationship, and just going up there to play with him –because we’re going to be arriving at the same time — would mean a lot to me, too. So, just having good friendships and knowing somebody that’s already up there… He’s also the coach’s son, so just knowing that means a lot to me. So, I know what I’m going to go up there and get and I know I’m going to have somebody that’s going to be beside me on the way.”

Randall would ideally like to make some more college visits before he renders his commitment decision but can’t check out schools in person right now due to the ongoing NCAA dead period, which was recently extended through at least April 15 of next year because of coronavirus concerns.

So, Randall says his commitment could come before the calendar turns to 2021.

“I would like to do it before the end of this year,” he said. “I have some destinations in mind. It’s not really a holding matter. I also would like to get to know the coaches and especially go up there once this dead period ends and see the campuses of the schools that I would like to see and just make my decision. Even though I can’t go see them, I’m going to be doing virtual tours and stuff like that. Those virtual tours give me a good perception of what the school has and what it looks like. It’s not like it is in real life, but it gives a good alternative for what we can do right now.”

Randall said he likely won’t release a top schools list before he announces his decision, but told TCI who the three main programs in contention for his commitment are.

“Oregon is in the mix,” he said. “I’ve always liked Oregon and that’s always been my dream school, so I don’t want to count them out. I would like to see a couple of more Zooms and virtual tours that they have, and I don’t want to never count them out just because they were always my dream school. But Oregon, South Carolina and Clemson right now are standing out to me a little bit.” 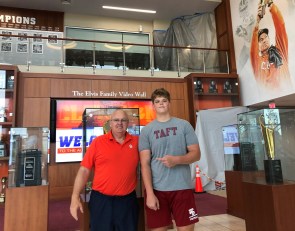