Carson Hinzman is one of the top interior offensive line prospects in the class of 2022, and the four-star offensive guard/center from Saint Croix Central High School in Hammond, Wisc., has been staying in touch with a bunch of the schools on his list of over a dozen scholarship offers.

“I’d say probably the most would be a lot of Big Ten schools,” Hinzman told The Clemson Insider. “I’ve been (in contact) a little bit with Alabama. Kind of a little bit of everywhere. But I’d say more of those kind of schools.”

Hinzman (6-4, 270) has also been in contact with Clemson, specifically defensive coordinator Brent Venables, Hinzman’s area recruiter for the Tigers.

“We were talking to him a little bit,” Hinzman said. “I was actually supposed to come down to visit earlier this spring, but obviously COVID got the best of it. But hopefully trying to get back down there for a visit sometime soon.”

Because he was forced to cancel his planned visit to Clemson due to the NCAA dead period that was implemented in March because of coronavirus concerns, Clemson is at the top of the list of schools Hinzman hopes to check out whenever in-person recruiting opens back up.

Right now, the dead period remains in effect through April 15, 2021.

“Definitely,” Hinzman said when asked if he intends to reschedule the Clemson visit in the future. “I know my first goal when COVID hit was to go to the places where I had already committed to going down there and seeing and taking a visit to do that. So, they’ll be especially like number one on the list anyway because I know it’s kind of a longer-distance trip.”

Hinzman has plenty of admiration for Venables, head coach Dabo Swinney and the Tigers’ program as a whole.

“Obviously they’re one of the greatest to ever do it, especially with Coach Swinney,” he said. “I have the utmost respect for them and their program there. They know how to make football players and they know how to win football games. So, like I said, they’re great.”

At this point in his recruiting process, Hinzman says his recruitment is “still pretty wide open right now.”

“The people that I said that were talking the most, they obviously have some pull over others that haven’t been at all,” he added. “But yeah, I’d probably say that.”

Hinzman said he expects to make his commitment decision “sometime around this summer maybe.”

Clemson is very methodical and patient when evaluating prospects for potential offers, but if the Tigers eventually decide to pull the trigger on an offer to Hinzman, he says it will certainly impact his recruitment.

“It definitely would,” he said. “Like I said, I have the utmost respect for their program, and I love their culture down there. So, yeah, definitely.”

Hinzman is ranked as the No. 77 overall prospect in the 2022 class regardless of position by Rivals, while ESPN considers him the second-best offensive guard in the class and 247Sports tabs him as the No. 4 OG in his class. 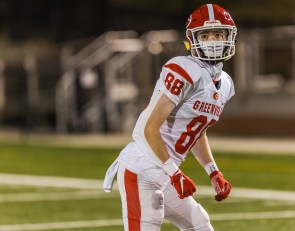