Did Williams give an idea on what Ross might do next year?

Did Williams give an idea on what Ross might do next year?

Justyn Ross’ future at Clemson is still up in the air, as the 2019 All-ACC wide receiver recovers from off-season spinal surgery that forced him to miss the 2020 football season.

But maybe his teammate and fellow Phenix City, Ala., native E.J. Williams gave everyone a hint on Ross’ future Wednesday when he spoke to the media to preview Clemson’s matchup with No. 3 Ohio State in the Sugar Bowl on New Year’s Day.

Ross flew to Pittsburgh on Dec. 8 to get an update on where he is at in his recovery from spinal surgery he had back on June 5. His visit with Dr. David Okonkwo, his neurosurgeon, was a positive one according to Clemson head coach Dabo Swinney.

The Clemson wide receiver is still waiting on a couple of pieces of information before he can be cleared to play again. Swinney is hopeful Ross will be able to play again, and if he is, it is not clear if that means he will be playing for Clemson next season or moving on to the NFL.

“He looks great. But his injury is one we are going to be very cautious with, and hopefully, he will keep moving in a very positive direction and he will get a full release somewhere in the near future,” Swinney said back on Dec. 13.

That future could be sometime after the first of the year. Or at least, according to Swinney, that is when Ross possibly could be meeting with Dr. Okonkwo to get an update on his progress. 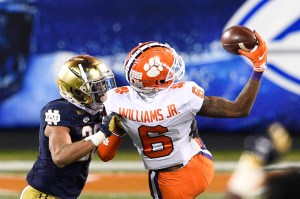 Williams has come along in his freshman season at Clemson. He has 19 catches for 261 yards and two touchdowns already this year. He introduced himself to college football fans last Saturday when he made a sensational one-handed catch along the near sideline in the Tigers’ 34-10 victory over Notre Dame. He later scored on a 34-yard touchdown pass from quarterback Trevor Lawrence on a crossing route.

However, it was his one-handed catch that grabbed the headlines and drew comparisons to Ross’ one-handed catches against Alabama in the 2019 CFP National Championship Game.