Former Clemson running back Roderick McDowell is joining Terry Bowden’s staff at the University of Louisiana-Monroe, where he took over as the new head coach last month.

McDowell and Bowden worked together on Dabo Swinney’s staff at Clemson the last two years. McDowell was a graduate assistant coach, helping offensive coordinator Tony Elliott with the running backs at Clemson.

McDowell will be Bowden’s running backs coach at ULM, it was announced on Monday. 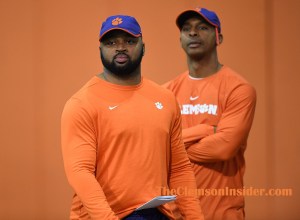 As a player, McDowell earned third-team All-ACC honors after running for 1,025 yards during his senior year at Clemson in 2013. He was a part of a Clemson team that went 11-2 and was ranked No. 8 in the final AP Poll. That team ended the year with a 40-35 victory over Ohio State in the Orange Bowl.

McDowell played at Clemson from 2010-’13, after redshirting in 2009. He was a part of Swinney’s first signing class, which is affectionately called by Swinney as “The Dandy Dozen.”

The last two years, McDowell has been a part of the Clemson program that has won two ACC Championships and played in the College Football Playoff. The 2019 Tigers advanced to the CFP National Championship Game.

Clemson was 24-3 in the two years McDowell worked as graduate assistant coach.