Linthicum ‘as good a center prospect as you could sign’

Linthicum ‘as good a center prospect as you could sign’

One of the four offensive linemen that Clemson inked during the early signing period in December is Ryan Linthicum, an early enrollee who arrived on campus to start his career as a Tiger this week.

Linthicum is ranked by Rivals as the nation’s No. 1 center prospect in the 2021 class, and Dabo Swinney believes he is every bit as good as his billing and says he brings some versatility to boot.

“I love Ryan Linthicum,” Clemson’s head coach said during the program’s National Signing Day show on Dec. 16. “He’s probably as good a center prospect as you could sign, and could play guard as well.”

Linthicum is a native of Damascus, Md., and went to Damascus High School, where he was teammates with Clemson freshman defensive lineman Bryan Bresee.

Swinney will never forget the time he hit the recruiting trail to attend one of Bresee’s basketball games and got to see Linthicum on the court as well. 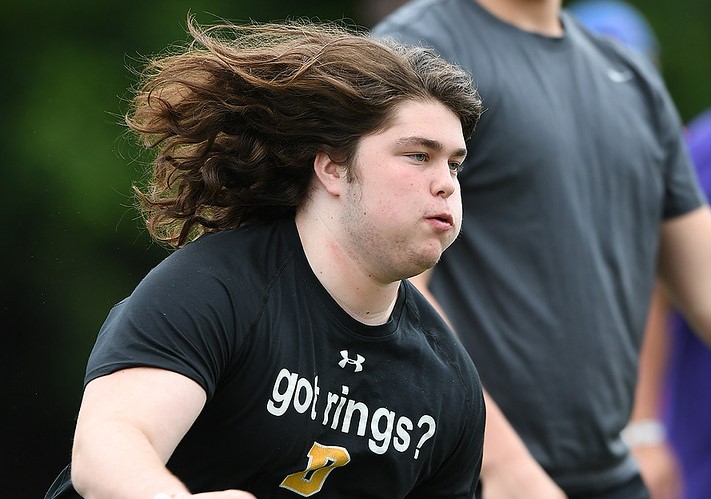 “I always liked him as a player. We had him in camp and all those things,” Swinney said of Linthicum. “But one of the things that I loved about him the most is I got a chance to go watch him play basketball when we were recruiting Bryan. I got a chance to go up and watch Bryan, and I get to watch Linthicum get out there and play basketball, setting screens and all this stuff, and missing layups (smiling). But I loved watching him play.”

Not only did Linthicum play football and basketball at Damascus, but he also competed in lacrosse.

An Under Armour All-American and a top-150 national prospect on the gridiron, Linthicum comes from an athletic family. He is following in the footsteps of his father as a college football player, while his sister is going to Division I Iona College in New York on a lacrosse scholarship.

“He’s got a twin sister that’s very athletic,” Clemson offensive line coach Robbie Caldwell said. “The whole family’s just fantastic. Dad played college football. But Ryan played three sports – basketball, football and lacrosse. He’s pretty good with that stick, too. So, we’re very excited about him. And he’s a natural center, so we don’t have to make one.”

Off the field, Linthicum is a perfect fit for the culture Swinney has created within his program.

“This is a great kid,” Swinney said. “Great demeanor, great personality, and I think Coach Caldwell, he picked a good one right here.”

Oh, and Linthicum has hair that rivals the locks of Trevor Lawrence.