Zack Gordon and Turk Pettit both had rounds of two-under-par 69 to lead Clemson to a five-under-par team score of 279 on Tuesday, and a tie for fifth entering the final round of the 2021 NCAA Kingston Regional at the Golf Club of Tennessee in Kingston, Tennessee.

The Tigers are tied for fifth with Charlotte at 566, two-under-par, for the 36 holes played over the last two days.

The top five teams after Wednesday’s third round will advance to the NCAA Championship Tournament in Scottsdale, Arizona starting May 28.

It will be quite a dramatic day on Wednesday, as only nine shots separate teams currently third-through-ninth place. San Diego State, ranked 26th in the nation, is the surprising leader entering the final round with a 36-hole score of 11-under par 557.

Host school Vanderbilt is second at 559 and Arkansas is third at 563. NC State, who was 10 shots better than Clemson in the first round when the two schools played together, is now just one shot ahead of the Tigers at three-under-par 565. Clemson and Charlotte are at 566, while Kent State is seventh at 567. Virginia is eighth at 571 and Houston is ninth at 572.

“Tomorrow is going to be an exciting day,” said Clemson Head Coach Larry Penley, who has announced he will retire at the end of this season. “There are so many schools who still have a chance to finish in the top five.

“I was proud of Zack Gordon with a two-under round.  He got off to a great start making four birdies on the front nine and really carried us.  And Turk finished well for the second straight day.  He made a 50 footer on the 16th hole, a par three that was playing all of 240 yards.”

Gordon’s 69 was his first round in the 60s since the second round of the Birmingham Collegiate back on April 6th.

He made four birdies on the front side and one of the back to tie for team honors for the day for just the second time all year. He was Clemson’s non-counter in the first round, and co-leader today. He stands in 43rd place in the individual standings after two rounds with a score of 145.

Pettit’s round of 69 was highlighted by that 50-foot birdie putt on the difficult 16th. It was one of just five birdies (out of 75 players) on 16 today. He followed that with a birdie on 17, and was one of just two players to birdie both of those holes on Tuesday.   Pettit stands in a tie for seventh place after two rounds with a score of three-under par 139.

Clemson will play with NC State and Charlotte on Wednesday and begin play at 9:00 a.m. eastern time.  Live scoring is available on Golfstat.com 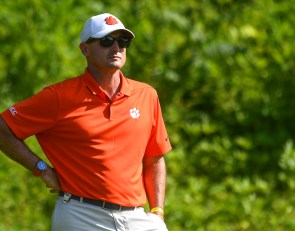