Massive DL looks forward to working out for Tigers

Massive DL looks forward to working out for Tigers

Clemson is among several schools that a huge defensive lineman in the class of 2023 is looking to visit in June after the NCAA dead period is lifted at the beginning of the month.

Oradell (N.J.) Bergen Catholic four-star defensive tackle Sydir Mitchell spoke with The Clemson Insider and discussed some of the trips he is planning to make.

“I’m trying to get to Clemson and Ohio State and Notre Dame, trying to get out there,” he said. “But I know for sure I’m going to Michigan for an unofficial visit.” 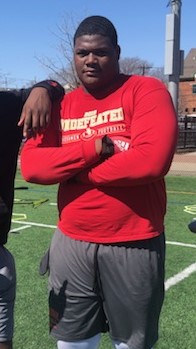 A whopping 6-foot-5, 350-pound rising junior, Mitchell is ranked as the nation’s No. 7 defensive tackle for the 2023 class according to the 247Sports Composite.

Mitchell said his visit to Clemson will be for the Dabo Swinney Camp, and he looks forward to working out in front of the coaching staff.

“I want to go down there and show that I’m a big guy that can move,” he said. “It will be a good thing to get down there so the coaches can see me and see how well I can play.”

According to Mitchell, members of Clemson’s staff have been checking in with his high school coaches and showing interest.

Mitchell believes he has what it takes to play for an elite program like Clemson and hopes to prove that to the coaches as he seeks a scholarship offer from the Tigers at their camp.

“They have a really solid football program,” Mitchell said of his interest in Clemson. “They’ve had a lot of D-tackles that come out of Clemson that can play.”

Mitchell is the No. 2 prospect in the state of New Jersey, No. 7 defensive tackle nationally and No. 130 overall prospect in the 2023 class per the 247Sports Composite rankings.