GREENVILLE, S.C. — After last year’s football camp was canceled because of the COVID-19 pandemic, it would have been easy for Isaiah Simmons and Tee Higgins to just move on and not host a camp in South Carolina.

Neither of the former Clemson stars are from the state of South Carolina. Higgins is from Oak Ridge, Tenn., while Simmons is from Olathe, Kansas. So, there only tie to the Upstate is Clemson. However, that is the only tie they need.

“It is just the impact Clemson left on me. It is truly a special place. It is a home away from home,” Simmons said. 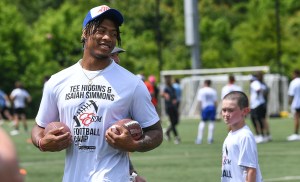 The two NFL players returned to the Upstate on Saturday, though they did not need to, and hosted their own football camp at the Kroc Center in Greenville, which was put on by Everett Sports Marketing.

“So, just being able to come back to this community, I feel it is a community of my own,” Simmons said. “That is personally my reason, just because Clemson is home and this is right down the road from Clemson, obviously.”

Higgins felt the same way. Saying the culture and importance of family Clemson head coach Dabo Swinney instills in all his players played a big role on why they wanted to return to the area and give back to Clemson fans.

“When I got here, Coach Swinney took me in as one of his own and that made me feel at home,” Higgins said. “So, being able to come back and run a camp for these kids out here in Greenville, it means a lot to me.”

Other former Tigers Kelly Bryant and Deandre Overton worked the camp, as did current Clemson running back Darien Rencher.

Both Higgins and Simmons left Clemson for the NFL after their junior seasons in 2019. Simmons was drafted No. 8 overall by the Arizona Cardinals in the first round of the 2020 NFL Draft, while Higgins was selected No. 33 overall in the second round of the same draft by the Cincinnati Bengals.

In his first year in the league, Higgins caught 67 passes for 908 yards to lead the Bengals. He also caught six touchdown passes.

Simmons finished his first year with 43 tackles, including two sacks. He also forced a fumble and had one interception. His first career interception came at home against Seattle quarterback Russell Wilson, which helped the Cardinals beat the Seahawks, 37-34, in overtime.