No surprise, Clemson fans come out to support Tigers in final game

No surprise, Clemson fans come out to support Tigers in final game

Of the 3,915 fans that showed up for Clemson’s season-finale Wednesday at Truist Field in Charlotte, the majority were wearing orange and purple.

Usually, it is not a surprise to see Tiger fans fill up a stadium. They do it all the time. But in a game that means nothing, a glorified exhibition, if you will, Clemson fans packed the area all around the first base to third base dugouts.

Clemson head coach Monte Lee said the turnout played a big role in the Tigers’ 11-5 victory over No. 17 Georgia Tech in the ACC Baseball Tournament.

“I want to thank a great Clemson crowd for coming to Charlotte to support our ballclub tonight,” Lee said after the game. “It felt like a true home game for us just with the amount of purple and orange in the stands. So, I really want to thank the fans for coming and supporting our ballclub.

“I know it has been a very, very tough season and to have Clemson fans come out and support our guys like they did tonight, means a lot and says a lot about the Clemson fan base. So, we greatly appreciate that.”

Clemson, which has no shot at making the NCAA Tournament following it is first losing season since 1957, produced 11 hits in its victory, while starter Davis Sharpe had one his best games as a Tiger, throwing seven strong innings.

Sharpe allowed just three runs on six hits, while striking out eight with no walks. He retired 13 of the last 14 batters he faced and gave up just one hit following the third inning. At one point, he retired 10 straight batters.

The center fielder said he and his teammates played off the energy the pro-Clemson crowd was giving them.

“It was unbelievable,” Teodosio said about the atmosphere at Truist Field Wednesday night. “Obviously, with COVID, we have not had that fan atmosphere that we usually do at Doug Kingsmore. It was awesome, just having the crowd behind us and being able to get a win with that kind of energy. It was a great environment here in Charlotte.” 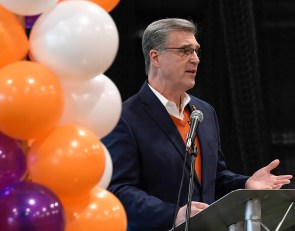