It did not take Dabo Swinney long to win Levon Kirkland over. While everyone else became a fan when Clemson started to win ACC and National Championships on a regular bases, Kirkland was a Swinney fan a longtime before.

Actually, the All-American linebacker whose name is etched into the Ring of Honor at Memorial Stadium, became a fan while Swinney was still the interim head coach. Kirkland recalls coming over to Swinney’s old office in the WestZone a couple of days prior to the Tigers’ game against archrival South Carolina in 2008.

“I visited him on Thanksgiving that year and I remember him showing me his whole plan,” Kirkland said on ESPNU Radio’s Off Campus show last week. “He did not quite have the job yet, but it was this big notebook of what he saw Clemson being.

“I left that meeting that day thinking, ‘Man, I hope he gets the job because I really think he is going to do a great job.’ And low and behold, he has done a tremendous job for the Clemson Tigers.”

Two days later, Swinney led the Tigers to a 35-17 victory over the Gamecocks. Two days after that the interim tag was removed from his title and he has been the head coach at Clemson ever since. 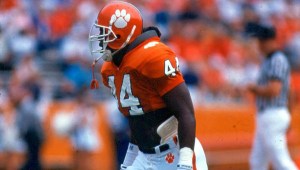 Levon Kirkland was a part of three ACC Championship teams at Clemson from 1987-’91. (file photo)

Kirkland was on Mark Packer’s show to talk about his recent nomination for the College Football Hall of Fame. Kirkland played on some the greatest teams in Clemson history from 1987-’91.

He was a part of three ACC Championship squads. In the five years he played outside linebacker for Danny Ford and Ken Hatfield, including his redshirt season, the Tigers posted a 49-10-1 record.

Led by Kirkland, who was a consensus All-American that year, Clemson’s 1990 team led the nation in total defense.

“We had good teams back then and those were the good ole days, but as Dabo says, ‘Now is the good ole days at Clemson.’ It is amazing and you feel a part of it, just seeing them play as well as they do, go to the natty a few times, win twice, it really does make you proud,” Kirkland said.

Since Swinney took over the program midway through the 2008 season, Clemson is 140-33. The Tigers have won seven ACC Championships, including the last six. They have also won two national championships, played for it two more times and have been to the College Football Playoff in each of the last six seasons.

“He has done a tremendous job. He is kind of one of those (guys) that works hard, has a vision and then goes and does it,” Kirkland said. “This Clemson Tigers team is on a tear, and they are going to be good this year. They are going to be really good.”