There are just a handful of fan bases that understand the significance of an expanded College Football Playoff.

Playoff games are expensive. Clemson has played in the title game four times in those six years, while Alabama has played in it five times.

Like Bama fans, Tiger fans have learned to roll the dice and pick what games they really wanted to attend. Some have even skipped going to the ACC Championship Game in order to save money for the possibility of attending a playoff game or the national championship.

Others have decided to attend the ACC Championship, but not go to the semifinal game, which can be the most expensive trip given it is a bowl game environment and events happen all during the week. So, they roll the dice and hold out for another national championship game.

With the CFP sub-committee recommending the playoff be expanded from four to 12 teams, it means travel expenses for fans are going to be even higher.

The proposal calls for the top four teams to receive and automatic bye to the quarterfinals, while the fifth, sixth, seventh and eighth seeded teams will host home playoff games against the 12, 11, 10 and nine seeds. However, the quarterfinals, the semifinals and the championship games will all be played on neutral sites.

“Well, I would suggest that there’s a pretty good alternative right in your living room if you don’t want to travel to the games,” CFP Chairman and Big 12 Commissioner Bob Bowlsby. “I’m sure we have some people that travel three weeks in a row, but the majority pick and choose. Some go to champ games, some go to bowl games. I don’t think it’s accurate to assume it’s the same cadre of people that go to every place on every occasion.

“The ones that do are largely family members, and I think we’ve done a good job with the CFP providing travel expenses and the like for travel of family members to participate in the CFP playoff games. You know, are there some logistics to it? Is it different than what we’ve experienced previously? Yes to both. But I don’t know that it’s fair to assume that 25,000 are going to travel to each site three weeks in a row and they’re going to be the exact same people.” 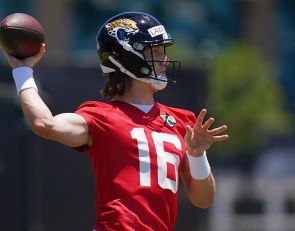