Clemson DB target takes to social media about his recruitment

Clemson DB target takes to social media about his recruitment

A Clemson defensive back target took to social media on Wednesday to clear the air regarding his recruiting process.

Niceville (Fla.) four-star cornerback/athlete Azareyeh Thomas (pictured above right) had this to say on Twitter:

I don’t know where I’m going yet AT ALL. Stop making these bold predictions thinking you know me. Let me enjoy my process with my family. When God tells me it’s time to pull the trigger on any school, I will. Until then.. Let me be. #Respectfully

This spring, Thomas narrowed down his list of more than 30 offers when he released his top eight schools. Clemson made the cut along with Alabama, Florida, Georgia Tech, Louisville, LSU, Miami and Oklahoma.

Clemson extended an offer to Thomas last October and hopes to get him on campus this summer. So far, he has visited schools such as Florida, Georgia Tech and LSU.

As a junior last season, Thomas recorded 390 yards rushing and five rushing touchdowns on 31 carries (12.6 average) to go with 35 receptions for 695 yards and nine more scores, as well as 27 tackles, seven pass deflections and an interception on defense. 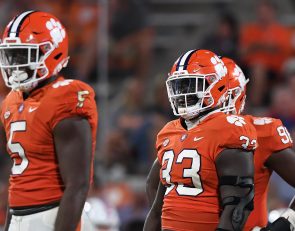 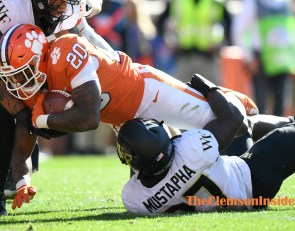