Tigers ‘could be at the top’ for 5-star DL

Tigers ‘could be at the top’ for 5-star DL

Tacoma (Wash.) Lincoln defensive end Jayden Wayne, one of the nation’s top prospects in the 2023 class regardless of position, was on campus June 5.

“I enjoyed Clemson,” he told The Clemson Insider. “The camp was very competitive.”

Wayne (6-5, 245) cited a couple of highlights from his experience at the Swinney Camp.

“Being able to be coached by Clemson coaches Todd Bates and Lemanski Hall,” he said. “And I liked working with KJ Henry.”

Along with Henry, Wayne enjoyed spending time with some of Clemson’s other current defensive linemen.

“I liked the D-line position room,” he said. “It felt comfortable.”

Many of the best programs in the country will be battling for Wayne’s eventual commitment, and his recruitment is wide open as it presently stands.

“Right now, everyone is pretty much equal as far as all the love [they’re showing],” he said. “I just have to see who keeps a strong relationship with me and wants to develop me as a person and a player.”

While Clemson hasn’t yet pulled the trigger on an offer to Wayne, Bates let him know the Tigers handle the recruiting process differently than most other schools and reassured him that the coaching staff is high on him.

“Coach Bates told me don’t doubt myself. That Clemson does things a little different,” Wayne said. “They really liked me and talked about me in the meetings.”

The Tigers could be a major contender for Wayne if they decide to enter the mix.

“I definitely think they could be at the top,” he said. “I just haven’t been offered yet to really consider them. But I really like the coaches and the campus.”

Wayne has also been to Washington, Alabama, Auburn, Georgia, Texas, Texas A&M, TCU, Southern Cal, Michigan and Notre Dame since the dead period ended June 1. He was scheduled to visit Oregon, Florida and Miami this week. 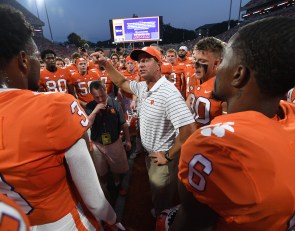