Though it has not been officially released by the ACC or the Big Ten Conferences, The Clemson Insider has confirmed with our sources who Clemson will play in the ACC/Big Ten Challenge this year.

TCI has confirmed the Tigers will play at Rutgers in the ACC/Big Ten Challenge this season. The exact date and time will be released at a later time.

Of course, the Scarlet Knights ended Clemson’s season last year in the NCAA Tournament when they knocked off the Tigers in the first round. The 10th-seeded Scarlet Knights, making their first NCAA Tournament appearance since 1991, upset No. 7 seed Clemson, 60-56, in the Midwest Regional on March 19 at the Bankers Life Fieldhouse in Indianapolis. 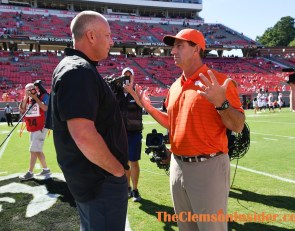