The Clemson Insider is excited to announce our first name, image and likeness endorsement deal.

“I am happy to have B.T. signed as our first NIL deal. He comes from a great family and has been a great representative of Clemson University,  I look forward to having B.T. help us promote The Clemson Insider,” said Robert MacRae.

The NCAA formally changed its policy to allow student-athletes to receive compensation in exchange for the use of their name, image and likeness on July 1.

“The world of college athletics changed on July 1,” MacRae said. “As soon as it became clear that players at Clemson would be able to be paid for the use of their name, image and likeness I began to investigate opportunities to promote TCI.  I look forward to announcing more advertising agreements in the near future.”

Potter opened his career converting his first 122 consecutive PATs, a school record, and holds the CFP National Championship Game record for longest field goal, which he converted on a 52-yarder against LSU. The kick was one of his Clemson record tying five field goals of 50 yards or more heading into the 2021 campaign.

In 2020, Potter earned an All-ACC Academic Team selection and was named a finalist for the Lou Groza Award for the nation’s top kicker. He made 18-of-23 field-goal attempts and 61-of-62 PATs in 12 games. And Potter was the only player in the nation with 15-plus field goals and 70-plus touchbacks.

Potter was also a highly touted recruit after a stellar career at South Pointe High School, S.C. As a Stallion he converted on 31-of-45 field goal attempts and made 211 PATs. His success earned him a top 10 ranking at his position by most recruiting services including a No. 1 kicker ranking by Chris Sailer. 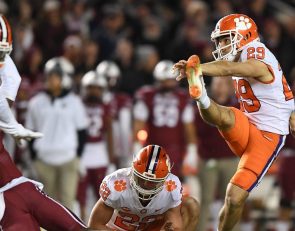