Clemson is in the hunt for the No. 1 prospect in the Aloha State and the nation’s top-ranked linebacker in the class of 2023.

While Akana waited until this past weekend to report the offer from the Tigers, the 6-foot-4, 225-pound rising junior actually picked up the offer in June when he was on campus to participate in the Dabo Swinney Camp.

“I was very excited and very happy,” Akana said of receiving the offer. “I know there’s not that many people out here in Hawaii that get an offer from Clemson. So, it’s something different. It was big. I was very, very excited when I got it.” 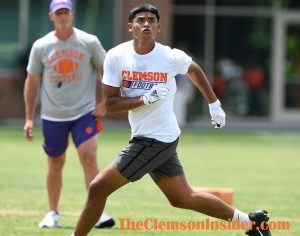 “He really liked how I could move at my height, being at 6-4.5, and be able to move, drop into coverage and rush off the edge,” Akana added.

Akana made the trip to Clemson with his father, and both came away impressed by the coaching staff as well as the facilities.

“The facilities were very nice, and the coaches, they’re very welcoming,” Akana said. “When I got there, they were all waiting there at the door. Meeting all of them was very good.”

“He’s a very cool guy,” Akana said. “He cares about his players, and I just thought that was very cool. Because coming in sometimes as a freshman, I know some colleges, when you’re a freshman, it’s just a little different compared to the seniors and stuff. But he just stood out to me in a way.”

Akana, who has accumulated around 30 total offers, said Clemson is “definitely” in his top 10 and he wants to get back on campus for a game-day visit this season.

As things stand now, Akana added, he is “still just taking in the process” and is “still open to all schools.”

“I just really want to find a place where the coaching staff is great, they can develop me to the next level, on and off the field, and just a place that will be like home to me,” he said.

Akana played his sophomore season in 2020 at Wasatch High School in Heber City, Utah, after high school fall sports in Hawaii were postponed due to COVID, and he will once again play in Utah this season.

Akana’s sister, Keonilei, originally signed with the Southern Cal women’s volleyball program but played her freshman season in 2020 at Nebraska.

Per usual, Clemson continues to pursue only the best of the best at the wide receiver position, and as such, the Tigers have only offered a couple of wideouts in the 2023 class to date. But one candidate to (…)