Clemson played host to one of the nation’s top signal-callers on Thursday.

Elite Golden State quarterback Jaden Rashada of Pittsburg (Calif.) High School arrived in town on Wednesday night before spending all day Thursday on campus from around 9:30 a.m. to 6-7 p.m.

Rashada, a 6-foot-4, 185-pound rising junior, is ranked as the country’s No. 6 quarterback and a top-50 national prospect regardless of position (No. 45 overall) according to the 247Sports Composite.

“I loved it,” Rashada said to The Clemson Insider regarding his visit to Clemson. “Just the culture and how cool and loving the coaches are, it made you feel like family. It was pretty cool being around all them.”

“They were just grateful I made it up there from Cali,” Rashada said. “They were letting me know where I stood with them, which was pretty good. So, just be patient and stuff with that process.”

Five-star Arch Manning is the lone quarterback in the 2023 class with an offer from Clemson to date, but Rashada feels he is in a good spot for a potential offer from the Tigers, based on what he has heard from the staff.

“I think I stand pretty well with them, as what they were saying, as long as I just keep doing my job on and off the field,” he said.

An offer from Clemson would certainly be a big deal for Rashada.

Rashada plans to visit Clemson again during the upcoming season and is circling the Georgia Tech game on Sept. 18 as a potential return date. He has also been to Penn State this summer and is slated to visit Ole Miss. 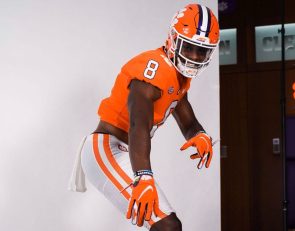