Exciting news, and my new role at TCI

Exciting news, and my new role at TCI

I have some exciting news for me and for The Clemson Insider.

As of today, which was previously announced, Davis Potter will officially take over as the beat writer for TCI, replacing yours truly.

Back in June, I made the decision to step away from the everyday beat covering the Tigers. It was not an easy decision, but I knew it was time for me to start a new chapter in my life. I had been contemplating this change for over a year and, in June, I realized the time was right to begin this new chapter.

I have covered the Clemson beat for the last 17 years—it’s amazing how time flies—including the last nine for TCI. It has been a blast. When I became a sportswriter, I had no intentions of ever covering my favorite childhood team. It’s crazy how things work out.

The good news, this is not goodbye. It is just a change in my role at TCI.

I will stay be a part of the TCI Family, I will just have a different role.

I will continue to do my Monday Morning Quarterback and Wednesday’s Thoughts columns, as well as write a few pieces here and there for TCI. You will still see me regularly on the message boards, as well.

Robert has been great and very understanding through the whole process and I have really appreciated his friendship through it all. I also appreciate the new role Robert has developed for me here at TCI.

Besides my writing, I will also debut a new daily podcast on TCI, which will begin this Wednesday morning. I will be doing the podcast with my long-time friend and Clemson Ring of Honor and Pittsburgh Steelers legend Levon Kirkland.

We hope to eventually turn it into a video podcast as well, as we continue along.

The podcast will be devoted exclusively to Clemson and College Football, though considering we both love the Steelers, I am sure we might accidently slip in a few Steelers comments from time-to-time, as well. But it will be 99 percent Clemson Football. 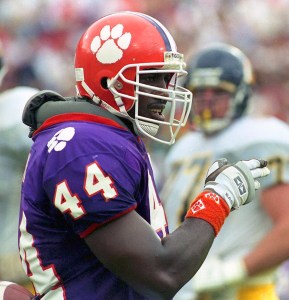 Levon Kirkland was nominated for enshrinement into the College Football Hall of Fame on June 2. He anchored a salty Clemson defense at linebacker from 1988-’91 and went on to play in the NFL for 11 seasons, including nine with the Pittsburgh Steelers. (file photo)

Kirkland was nominated for enshrinement into the College Football Hall of Fame on June 2. He anchored a salty Clemson defense at linebacker from 1988-’91 and went on to play in the NFL for 11 seasons, including nine with the Pittsburgh Steelers.

The former Tiger is already in the Clemson Ring of Honor and the Clemson Athletic Hall of Fame for his accomplishments on the field, four-year degree and significant contribution to the athletic department.

At Clemson, Kirkland helped the Tigers win two ACC Championships (1988 and ’91) was a first team All-ACC selection for three seasons, was a second team All-American and finalist for the Butkus Award in 1990 and was a consensus First Team All-American in 1991. He was also the MVP of the Tigers’ 1989 Gator Bowl team that bested West Virginia.

Kirkland was a part of a Clemson defense in 1990 that led the nation in total defense, as it allowed just 219.2 yards per game.