Elliott: D.J. is 'ready for his time'

Elliott: D.J. is 'ready for his time'

When Trevor Lawrence fell ill to COVID-19 Clemson remained in sure hands with Uiagalelei when it needed a second half comeback to fend off Boston College and even in a top-five matchup on the road at Notre Dame.

The reason for Uiagalelei’s confidence then and entering another top-five showdown to open the season boils down to his desire for greatness and increased preparation.

Clemson offensive coordinator Tony Elliott said Uiagalelei beat him to the office on Saturday hours before practice to prepare for the Bulldogs.

“A perfect example is that we had an early practice on Saturday, and I walked in the building, and he was walking in just ahead of me to go watch film on his own,” Elliott said. “When the players didn’t have to be there for another couple of hours, he’s there putting in.”

The sophomore learned the necessity of preparation and film study from listening to NFL quarterbacks on ESPN and talking with other successful players over the last few years.

Uiagalelei confirmed he arrived at the Allen Reeves Football Complex three hours before the start of practice to get a head start on his day.

“There’s different stuff I watch practices or different game film depending on like Georgia game plan and whatever we are doing with defensive recognition,” Uiagalelei said. “Yeah, I think I got here at 7 a.m. watched film for a little bit and then maybe get some treatment after.”

“I just like to get my day started early and try to get up here before everybody is up here and get a little bit more film in,” he said.

Elliott said it’s a regular occurrence for Uiagalelei to spend extra time in the film room even when nobody else is in the building.

“Every couple of hours I’m hearing his iPhone playing because he’s playing music while watching video, so you know D.J. is in there putting in extra work,” Elliott said. “He prepares like a pro and he’s ready for his time.”

The goal of the preparation for Uiagalelei is simple, to be the best version of himself and put the Tigers in position to win.

“For me I want to be great it’s as simple as that,” Uiagalelei said. “I want to make sure that when I step onto the field I’m ready to go and my teammates can count on me that I’ll be out there ready to go.” 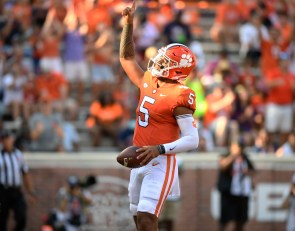 Tigers get into the end zone