There are plenty of reasons why Saturday’s 10-3 loss to No. 5 Georgia hurt Clemson so much.

First off, losing to your border rival is not a good feeling. It feels like a punch to the gut for the Tigers’ faithful. The only thing that can feel worse it losing to in-state rival South Carolina.

Secondly, the way in which No. 3 Clemson lost hurts.

The Tigers could not run the football, and subsequently they could not score. They had just two total rushing yards on 23 carries.

You have to go all the way back to 2008 to find a rushing performance that was worse than what we saw on Saturday night at Bank of America Stadium in Charlotte. In case you are wondering, that’s 0.09 yards per carry.

Of course, Clemson people probably remember which game I am talking about in 2008. The Tigers had zero rushing yards against Alabama in the infamous Chick-fil-A Kickoff Classic. That is the only other time I can remember seeing a Clemson offensive line just totally look inept in a game.

The Tigers could not only run block in the game—running backs combined for 24 yards on 10 carries—but they could not protect quarterback D.J. Uiagalelei either. Uiagalelei was sacked seven times Saturday night, tying a Clemson record for most sacks allowed in one game. Florida State and Virginia both recorded seven sacks against the Tigers in 1997.

Saturday’s loss also hurts, and more importantly, because of what the loss means to Clemson’s postseason goals. Though the Tigers still have 11 games remaining, and can still win an ACC Championship, they cannot afford to lose another game.

They will have to run the table the rest of the way out and then win the ACC Championship for a seventh straight time to even be considered for consideration into the College Football Playoff.

Granted, losing to Georgia, who has an opportunity to go undefeated in the regular season, will not hurt the Tigers should they go 12-1. However, the fact they are playing in a weak ACC and the rest of their non-conference foes consist of S.C. State, UConn and South Carolina, their chances at getting a marquis win are slim.

Clemson hopes it can maybe get a top 10 opponent in the ACC Championship Game, but that is unlikely after the performances by No. 10 North Carolina and No. 14 Miami over the weekend. The Tar Heels opened the season with a 17-10 loss at unranked Virginia Tech, while the Hurricanes were beat up by top-ranked Alabama, 44-13.

Besides the Tigers, those were the two other ranked teams in the ACC heading into Week 1. Granted, Boston College, NC State or Pittsburgh could possibly be ranked football teams by the time the selection committee makes its final picks in December but getting a quality win over a top 10 or top 15 opponent does not seem likely at this point.

Yes, there are still 13 weeks remaining in the college football season and anything can happen and likely will. However, the pain from that sucker punch Georgia delivered on Saturday night will likely not go away all year. 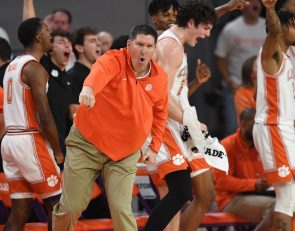