When Trevor Lawrence takes the field this Sunday for his first NFL regular season start, he will have a “C” on his chest.

The Jacksonville Jaguars’ franchise quarterback and No. 1 overall pick in the 2021 NFL Draft was among seven players announced as captains by head coach Urban Meyer on Wednesday. The seven captains were decided by player vote Wednesday.

“It was great, man,” Lawrence said to the media after being named a captain. “It’s a really cool feeling, especially as a younger guy, just having that support from my teammates. Really, like I said, being named the starter and then now a captain, nothing changes. Same expectation, and now it’s time to go out there and win some games.

“But I’m really excited. It’s definitely an honor. It’s a cool moment for me to be named a captain with those other guys. Just a bunch of great guys in the locker room. We had a ton of guys that got votes. But definitely really cool.”

Lawrence also spoke to reporters about the bet he lost on the Clemson-Georgia game to one of his Jaguars teammates, former UGA wide receiver Terry Godwin.

Being on the losing end of the bet, Lawrence had to wear Bulldogs gear provided to him by Godwin.

“I would’ve never bought it. I would’ve never spent my money on that,” Lawrence said, smiling. “But Terry, good friend Terry, he was kind enough to give it to me after. We had a bet, whoever won, the other person had to wear their team’s stuff. So, he brought me in like a full sweat suit, medium pants, everything’s too small… It was funny, though. It was good.”

Lawrence and the Jaguars open the 2021 regular season on the road against the Houston Texans at 1 p.m. Sunday. 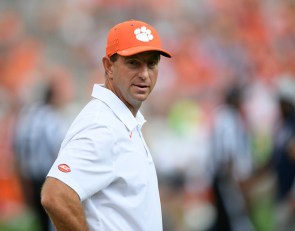 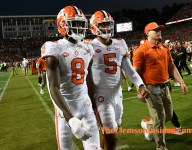