Saturday’s home opener at Death Valley will not be like any home opener in Clemson history.

The sixth-ranked Tigers’ 5 p.m. contest against S.C. State will not only mark their first home game with a capacity crowd since the world pandemic hit 20 months ago, but the game will also be played on the 20th anniversary of September 11.

Clemson will honor the First Responders Day in honor of the 20th anniversary of 9/11.

“It is going to be a special day,” Clemson head coach Dabo Swinney said. “I know it is First Responders Day for us and it is 9/11. So much goes through my mind when I think about 9/11. Where I was, what I was doing and that whole day and the emotions of that day. Then all the weeks and months after that, so I am just so thankful to all the first responders and that we can honor them well on Saturday. And also remember those who lost their life. All the families that went through so much grief from that horrific moment.

“But I know it is going to be a great day here.”

Clemson will also celebrate Land Grant Day on Saturday, and will honor former Clemson running back, now assistant coach, C.J. Spiller on his induction into the College Football Hall of Fame.

Spiller’s ceremony will be held at halftime.

“Our young men are super excited about going out and playing, and hopefully playing our best game,” Swinney said.

Clemson (0-1) looks to snap its first two-game losing streak since 2011. The Tigers closed last year with a loss to No. 3 Ohio State in the Sugar Bowl, as part of the College Football Playoff, and of course, opened this year losing to No. 2 Georgia last Saturday.

But Clemson has not been home since its 52-17 victory over Pitt on November 29, 2020. And this will mark the first time both of the Tigers’ freshmen classes will play in a packed Death Valley.

This will be the Tigers’ 121st home opener in its 126 seasons, as there were five years in which Clemson did not play a game at home. They have a 95-17-8 record in home openers.

The Tigers have won 17 straight home openers dating back to 2004. A win would break Clemson’s longest winning streak in home openers (17 from 1944-60). 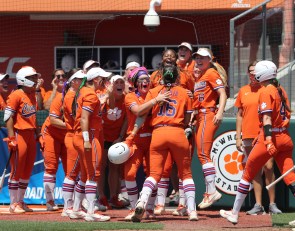