Lawrence: 'I just gotta do better'

Lawrence: 'I just gotta do better'

A former Clemson Tiger made a critical error with the game on the line.

During Washington’s 30-29 win over the New York Giants on Thursday Night Football, Dexter Lawrence gave The Football Team a second chance at life.

Dustin Hopkins missed a game-winning 48-yard field goal, but Lawrence was ruled offsides on the game’s final play. Hopkins was able to line up five yards upfield and nailed a 43-yarder to send Washington home with its first victory of the season.

While the game shouldn’t have come down to one consequential play and the Giants had other missed opportunities at putting points on the board, Lawrence wore his mistake and took responsibility.

‘That’s on me. I have to be more disciplined at times in a critical situation—that’s why I’m on the field …I just gotta do better,” Lawrence said during Friday’s Zoom availability with reporters, per NFL Network’s Kim Jones.

Lawrence was asked if he thought he was offsides, which has been left up for debate on social media, but he declined to answer, indicating that his opinion on the matter doesn’t hold much weight.

Dexter Lawrence on zoom: “That’s on me. I gotta be more disciplined in that time, a critical situation. … I just gotta do better. …The refs call what they call.”
You weren’t offsides?
“That don’t really matter. My opinion don’t matter.” #NYG

"I'm not going to put this on Dexter Lawrence" – Joe Judge pic.twitter.com/s9PLcyiyZ2 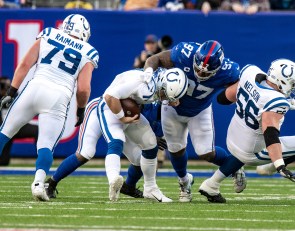 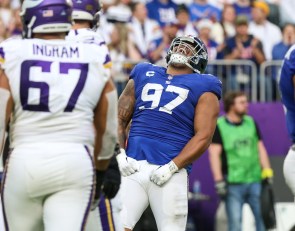 Big Dex collects yet another honor