Elliott: 'We did a good job they just had a really good game plan'

Elliott: 'We did a good job they just had a really good game plan'

Clemson struggled to find momentum on offense again in a sluggish 14-8 win over Georgia Tech on Saturday at Memorial Stadium.

The Yellow Jackets out-gained the Tigers 309-284 in total offense. And they took the game to the final seconds before James Skalski made a game saving tackle with 0:15 remaining in the contest and the defense came up big again after Tech recovered an onside kick.

Clemson offensive coordinator Tony Elliott expressed pride in his unit for finding a way to win the game. But admitted Georgia Tech surprised the Tigers early by dropping eight in coverage to take away the opportunity for explosive plays.

“I’m really really proud of our guys because we prepared for who we thought they were going to be and they came out in a structure that was completely different than what we’ve seen,” Elliott said. “And we only saw that one other time, last year against UCF.”

The move by Georgia Tech forced Elliott to reevaluate the Tigers’ game plan. And he felt like they responded well in the second half except for the pivotal fumble by D.J. Uiagalelei in the red zone at the start of the fourth quarter and a turnover on downs in the red zone in the second quarter.

The Yellow Jackets also limited Clemson to nine possessions on the afternoon including the one play fumble that Clemson recovered for a safety with 0:07 to play.

Moving forward Elliott wants to see Clemson limit turnovers and come away with more big plays to get in a rhythm.

“We put together some good drives we just didn’t finish,” Elliott said. “Two times in the red zone we had a fumble and got stopped on fourth down.”

Uiagalelei finished the game 18-of-25 passing for 126 yards and added eight carries for 46 yards on the ground.

He agreed that Georgia Tech out schemed Clemson with unique coverages and credited his team for responding to walk away with a win.

“For the most part we did a good job they just had a really good game plan, hats off to Georgia Tech,” Uiagalelei said. “They did a great job and made it difficult on us but we found a way to win and we got the W.”

The sophomore quarterback has not hit the panic button yet and thinks Clemson is due for a breakout performance on offense.

Clemson returns to action next Saturday as it continues ACC play against N.C. State at Carter Finley Stadium Raleigh, North Carolina at 3:30 p.m.

A November to forget 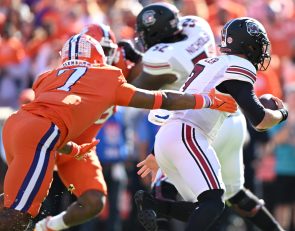