After Clemson called timeout prior to Georgia Tech’s fourth-and-goal play from the Tigers’ 2-yard line Saturday night, James Skalski walked over to defensive coordinator Brent Venables and said, “I haven’t made a play all night.”

With 19 seconds to play and the Tigers clinging to an eight-point lead, the Yellow Jackets faced a fourth-and-goal from the Clemson 2-yard line. Georgia Tech quarterback Jordan Yates shoveled a pass to tight end Dylan Deveney. But Skalski blew the play up, hitting Deveney at the three-yard line and then brought him down for no gain to preserve Clemson’s 14-8 victory at Memorial Stadium.

“He is in his sixth year, so I don’t know how many classes he has left, but he is always able to be in the facility and watching film. He takes a lot of pride in that,” defensive tackle Bryan Bresee said after the game. “So, just up there, bringing the young backers up there watching film, he just stays on top of everything. Whenever you are in the facility, you can find him in the film room. He just always stays on top of that. He is a great leader to everybody. He just commands the field very well.

“It is so fun playing with him just because of that.”

Skalski’s heads up play, turned out to be the eventual game-winner, as the defense held off the Jackets one more time following a safety with seven seconds to play.

“I thought he played an amazing game,” Venables said. “The game is slow for him because of all of the preparation that he puts into it week in and week out. He takes nothing for granted. He embraces and seeks out the competitiveness of every play and wants to be on the right side of it. 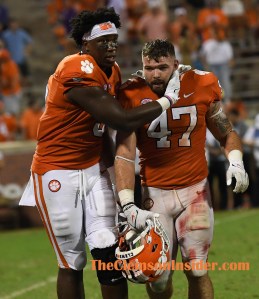 “He has incredible will, heart and toughness that makes you so proud. He is an amazing young guy.”

Before making the final stop, Skalski’s play recognition paid off on the previous play, too. Tech tried to run a reverse on third-and-goal from the three to Mason Jordan. But the super senior, who gets teased about being the old man, again recognized the play and chased down Jordan from behind the play to help defensive tackle Tyler Davis make the tackle.

“Again, he is a six-year player. He is so smart. That play he made on the right side was unbelievable. His closing speed, people don’t realize how fast he is. He made some great, I mean great plays.”

Skalski finished the night with nine tackles and had three quarterback hurries. Swinney said Skalski will be the first one to say he was not perfect, and he should have made a couple of those tackles on the quarterback draw Georgia Tech ran a few times.

But he was perfect when the Tigers needed him to be the most.

Clemson’s goal line stand, its second in as many weeks, was impressive considering the Yellow Jackets ran 25 plays to Clemson’s one following Will Shipley’s three-yard touchdown run with 8:12 to play in the game.

“(Skalski) epitomizes what that whole group put on display tonight,” Venables said. “It was fun to watch them keep swinging, keep fighting, keep competing and finding a way.” 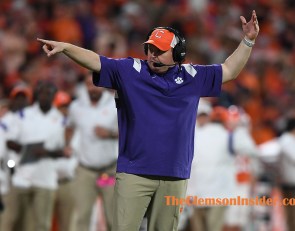