40 years later, Tuttle reflects on the moment that changed his life forever

40 years later, Tuttle reflects on the moment that changed his life forever

Perry Tuttle was trying to relax by the pool when everything changed.

It was January 1982, and Tuttle was just days removed from etching his place in Clemson football lore. The Tigers’ senior receiver had a couple of hands in delivering one of the most memorable plays in program history when he hauled in the winning touchdown against Nebraska in the Orange Bowl to secure Clemson’s first-ever national championship.

But it wasn’t until he was thousands of miles away from Miami that he realized just how big his fame was about to get.

An All-American for the Tigers during that perfect ‘81 season, Tuttle traveled off the mainland to compete with other top college football players from around the country in the Hula Bowl, a postseason all-star game played in Hawaii at the time. Tuttle had some time to kill one day before the game, so he and some other players headed to the pool at their hotel.

As Tuttle lounged poolside, Southern Cal running back Marcus Allen, who won the Heisman Trophy that season before moving on to a Hall of Fame career in the NFL, walked over and slapped a copy of the most recent edition of Sports Illustrated on his chest. There Tuttle was on the cover, a photo of him celebrating his catch. There was a caption, too.

“I went running to my room and called collect to my parents. They didn’t know what hotel I was staying at in Hawaii for this Hula Bowl, and they said, ‘Everybody has been calling here trying to find out where you are.’”

A lot has happened in Tuttle’s life since. He spent four seasons with three teams in the NFL after being drafted 19th overall by the Buffalo Bills. He then moved on to the Canadian Football League, where he helped the Winnipeg Blue Bombers win two CFL titles in six seasons, before he moved back to his native North Carolina to begin life after football.

Now living in Charlotte, Tuttle is a speaker, author and leadership coach working with businesses and professional athletes. He also recently got involved in the tech world, helping create the Vertigo Music app with another project in the works.

Last but certainly not least, there’s his family. Tuttle and his wife, Loretta, have six children — three boys and three girls — and two grandchildren, which take up most of his time nowadays.

But the memory of that iconic Orange Bowl moment is just as fresh in Tuttle’s mind as it was four decades ago. Facing third-and-goal from Nebraska’s 13-yard line midway through the third quarter, Clemson needed a touchdown if it was going to extend its five-point lead to two scores. As the Tigers broke the huddle and approached the line of scrimmage, quarterback Homer Jordan glanced toward Tuttle and nodded, which not only let Tuttle know the ball was coming his way but also to change his route.

“The nod was always the fade, but it’s not like we did it every week,” Tuttle said. “That was the first time he had ever nodded during the whole season. And it was the biggest game of our lives. So, for me, I was like, ‘Whoa.’”

Tuttle ran toward the front corner of the end zone, and Jordan lofted the pass in his direction. Nebraska cornerback Allen Lyday ran with Tuttle stride for stride, but the back-shoulder throw was placed where, if anyone was going to catch it, it would be Tuttle. He spun around, high-pointed the ball and fell to the ground with the score that ultimately made the difference in a 22-15 victory after Nebraska scored another touchdown in the fourth quarter.

“It wasn’t where I beat (Lyday) so badly that it was easy,” Tuttle said. “It was a hard catch, but it was the right throw. It was a perfect throw.”

Tuttle immediately jumped up and extended the ball in the air with his right hand in celebration, making for the image that landed him on the cover of one of the world’s most popular sports magazines. Tuttle became a household name essentially overnight, a stroke of irony considering his childhood football hero, former Dallas Cowboys receiver “Bullet” Bob Hayes, was the reason Tuttle began playing football in the first place.

Growing up near Winston-Salem, North Carolina, Tuttle’s first love was basketball. But his elementary school coach, Pete Chitty, wanted Tuttle on the football team once he reached the fourth grade. Tuttle said the only way that would happen is if he got to wear No. 22, the same jersey number Hayes wore.

Chitty obliged, and the rest is history. Tuttle wore No. 22 through his playing days.

“I wanted to be famous because of Bob Hayes,” said Tuttle, the only Clemson athlete to ever grace the cover of Sports Illustrated at the time.

Getting married and starting a family, dedicating himself to his Christian faith and reconciling with his late father are what Tuttle considers some of the most impactful moments of his life, but that catch came along as the first life-altering event. And as he soon found out, it wasn’t always for the better.

Days after returning to Clemson from that Hula Bowl trip, Tuttle visited Mr. Knickerbocker, a local sports apparel store, with one of his former teammates. As they were leaving, a woman approached Tuttle with her young son. Tuttle said he thought she was going to ask for a photo or an autograph.

That wasn’t the case.

“She was so ticked off at me that her boy said something that, while they were in the store, he overheard me say,” Tuttle said. “And because I said it, she was so mad that I didn’t watch my language and her son repeated it. So life became complicated for me.”

There was also that time Tuttle returned to Clemson for one of the first reunions of the ‘81 title team and asked one of his best friends from college how her brother was doing, unaware that he had passed away during their senior year.

“I was just so embarrassed that I was so into me that I missed it,” Tuttle said.

Tuttle said his notoriety grew to the point that he received letters from fans around the world, but those experiences back home taught him a lesson about his newfound fame. With more eyes on him than ever before, expectations were different.

“I’ve got to watch what I say, I’ve got to watch where I’m going and who I’m with,” Tuttle said. “I didn’t particularly like that at all. So, to this day, especially if I’m in South Carolina somewhere or even here in Charlotte, I’m so aware of what that means. I’m OK with it now, but back then, no one ever prepared me for the Sports Illustrated cover.”

From a curse to a blessing

Tuttle’s most recent trip to South Carolina came last weekend when he returned to Clemson for the 40-year reunion of the Tigers’ first national championship team. Tuttle was recognized along with most of his former teammates and the coach of that ‘81 team, Danny Ford, during the first quarter of the Tigers’ 19-13 win over Boston College.

Tuttle said it was particularly special for him to catch up with some of those teammates that he hasn’t seen in years.

“We have a love for each other that’s just incredible,” he said.

There are still plenty of fans that do approach Tuttle for photos and autographs. Tuttle said he’s still surprised when it’s those who are three or four decades younger than him asking, but he’s largely used to it by now. As the years have gone by, his experiences have changed his perspective regardless of the situation.

“For me to sign their shirt or their hat, it’s an honor. I’m like, ‘Do you really want this?’ So it’s really turned into a blessing.”

And that’s why Tuttle wouldn’t change a thing.

“I’m so grateful, and I love Clemson,” he said. 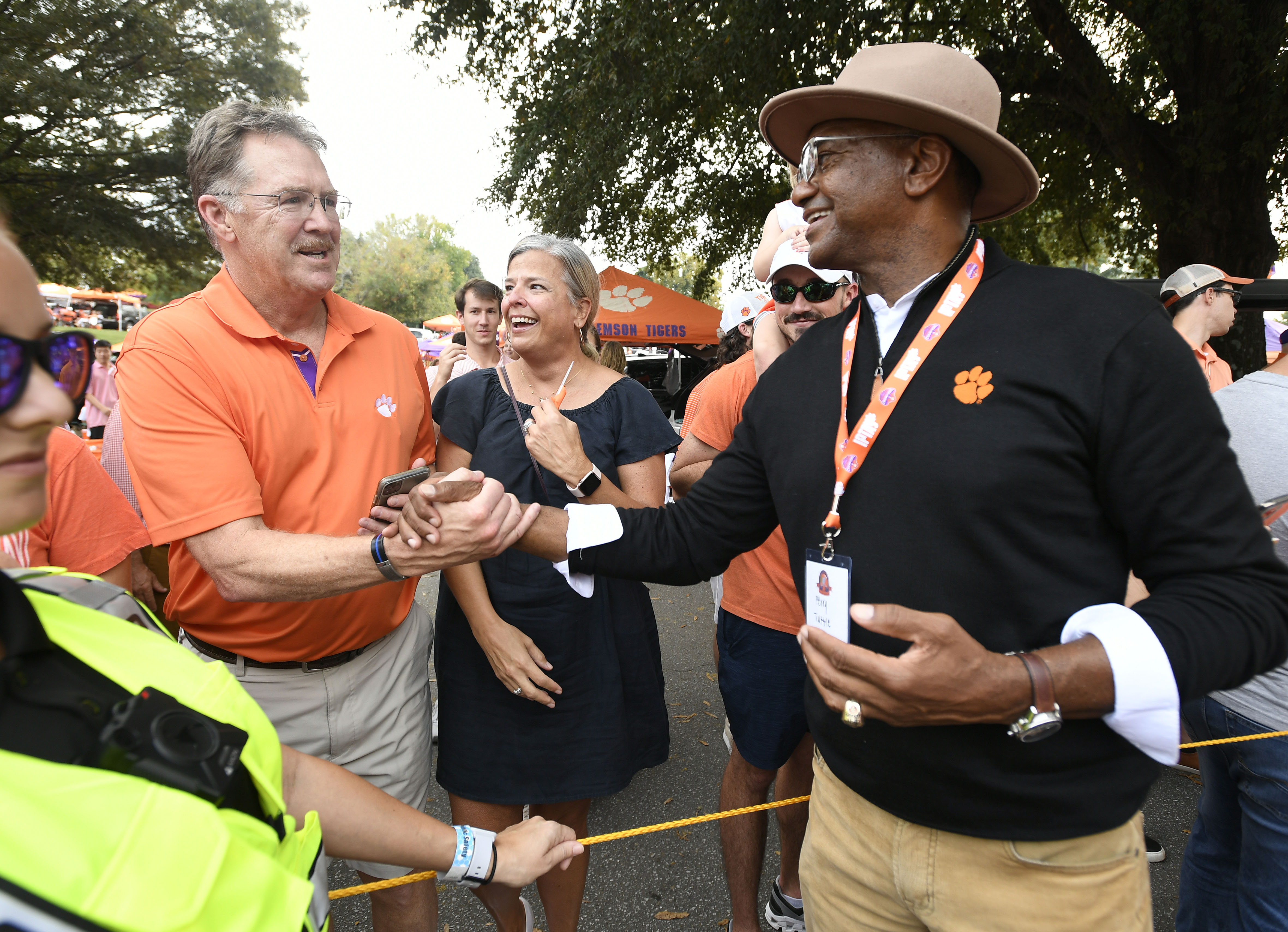