Naz Bohannon entered the transfer portal earlier this year after graduating from Youngstown State University and will be a new powerful asset to the Clemson basketball team.

Bohannon put up impressive numbers while at Youngstown with 1,200 points, 975 rebounds and 275 assists during his four-year tenure. 412 of those points were collected in his senior year alone, and he led the Penguins in both scoring and rebounding last season.

Head coach Brad Brownell touched on how he’s developed the program over the past decade, which has helped attract guys from the transfer portal.

“When you bring in guys like Naz or David Collins on a visit and they get to see what Clemson has to offer, I think it’s impressive,” he said. “They’ve seen success on the court, Sweet 16 and NCAA Tournament teams. They see guys graduating, they see a good place to go to school and get a graduate degree like Naz is going to get.”

Bohannon is fully committed to contributing wherever he’s needed, whether that be passing, resounding or scoring.

“My expectations as a Tiger are to come in and obviously fit in, play my role, and do everything that I can do to help win,” he said. “If Coach tells me this game we need you to focus on rebounds, then I’m going to focus on rebounding that game. If it’s passing this game, or the next game he might want me to score a little bit more points, just fitting that agenda and doing what Coach wants me to do to help the Tigers win.”

On why he chose Clemson, Bohannon experienced an immediate family feel from Brownell and the entire squad.

“For me I would just say respecting everything that Coach did with the program and going into the portal,” he said. “And researching what it was that I was looking for in a school, I could respect the culture that he had put in place and the staples that the program stood for. Once I got on the phone with Coach Brownell and talked to the assistants like Coach (Antonio Reynolds) Dean and even meeting some of the guys, it was a no-brainer for me.”

Brownell believes that there isn’t one guy who can fill the shoes of Aamir Simms, who was drafted by the New York Knicks earlier this year.

It will take a collective effort by multiple guys to play a more important role and make bigger plays in games.

“Again, we had a really good year last year. We went to the tournament, and a lot of it was because of Aamir Simms and Clyde (Trapp) and Jonathan Baehre, our three seniors,” he said. “Those three guys are going to be missed, but that opens up opportunities for other guys, and we’re hopeful that those guys are ready to take a big step.” 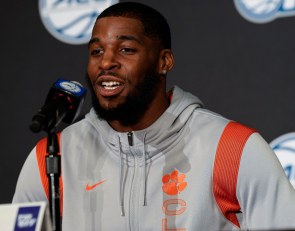