Ennis recalls getting 'rag-dolled': 'I never wanted it to happen again'

Ennis recalls getting 'rag-dolled': 'I never wanted it to happen again'

After tight end Davis Allen received a targeting penalty and was consequentially ejected in the first quarter of the game against Boston College, Clemson was forced to utilize its depth at this position.

Senior Braden Galloway was also out with a concussion, so the next man up was redshirt freshman Sage Ennis.

At 6-foot-4, 240 pounds, Ennis is a suitable tight end, and had his first career catch, gaining 8 yards for Clemson against BC on Saturday, Oct. 2.

“I pray to God every day to give me the strength to give great effort and be able to capitalize on the opportunity,” Ennis said.

With Ennis having limited experience on the field, the leadership of Allen and Luke Price on the sidelines during the BC game helped Ennis navigate certain situations.

“I’m right next to Braden in the locker room, so I’m always trying to get in his ear,” Ennis said. “But being able to have Luke and Davis to talk to and ask them questions, and to reassure myself that I was doing the right thing, was really big just to have that leadership there on the sidelines.”

During the bye week in preparation for this Friday’s game at Syracuse, Ennis focused on his leverage and worked on blocking.

“Everybody likes a tall tight end but that comes with some curses,” he said. “You gotta get lower than the other guy, especially when you’re 6-4, 6-5, against linebackers that are 6-1, 6-2. It’s all about a game of leverage, so I just tried to work on preparation and film and know how they’re gonna attack.”

Ennis recalls how when he enrolled early at Clemson in January 2020, he was caught off guard by the strength and size of the defense he was facing in practice consisting of guys like Xavier Thomas and Myles Murphy.

“I remember one time I got rag-dolled around and I wasn’t used to that,” Ennis said. “I remember looking back at Coach (Danny) Pearman like, ‘What in the world is going on?’ I just wasn’t used to that. When that happened, I never wanted it to happen again. I didn’t want to get manhandled, so from then on I made it a choice and a priority to make sure that I was going to put myself in the best situation and learn from others, and continue to get stronger and understand the blocking game better.” 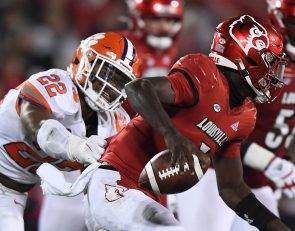 The lowdown on Louisville from a Cardinals beat writer 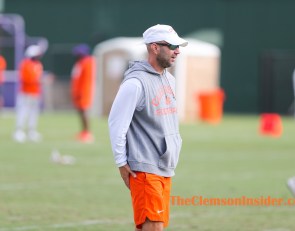 Richardson on perspective: 'I’ve sat here and watched this press conference when it was 3-8'