Clemson reaches into bag of tricks for 'huge game-changer'

Clemson reaches into bag of tricks for 'huge game-changer'

SYRACUSE, N.Y. — Clemson’s offense continues to do its part in making sure the Tigers play the same game each week, and that’s not a good thing.

A week after seemingly taking a couple of steps forward against Boston College (438 total yards), the Tigers went backward against Syracuse on Friday in a win that was once again too close for comfort. Clemson (4-2, 3-1 ACC) again failed to reach the 20-point mark against an FBS opponent, mustering just 319 yards and failing to get out of its own way at times with penalties, drops and missed assignments that again left it up to the nation’s second-best scoring defense to bail the Tigers out.

It wasn’t until Syracuse’s Andrew Szmyt sent a 48-yard field goal wide left with 38 seconds left that the Tigers could breathe yet another sigh of relief in their 17-14 win. It was their fourth straight one-possession game and third victory decided by six points or less.

But a couple of quarters earlier, with a somewhat promising drive going, the Tigers reached into their bag of tricks for a play that ultimately helped them prevail.

With Clemson facing fourth-and-5 from Syracuse’s 41-yard line with 1 minutes, 10 seconds left in the second quarter, Swinney called a timeout to think it over. He ultimately decided to send the punt team out kick it away. Or so he let on.

“I was coming off the sideline, and I was pissed,” quarterback D.J. Uiagalelei said. “I was like, ‘Dang, why the heck aren’t we going for it?’ Coach Swinney, he wouldn’t tell nobody.”

The only other people that knew were punter Will Spiers, his protectors and his gunners, who had been practicing this particular fake all season, Swinney said. The formation, though, seemed to indicate something was up.

Receiver Joseph Ngata lined up off the ball to the boundary behind three potential blockers, including tight end Davis Allen. After the snap, Ngata looked toward Spiers as if he was supposed to be the intended receiver. Only that wasn’t the case.

Spiers faked a pass to Ngata as Allen, who initially acted like he was blocking, leaked out of the formation down the sideline. Syracuse didn’t bite on the pump fake, but Spiers let Allen matriculate down the field and heaved a pass his way anyway. 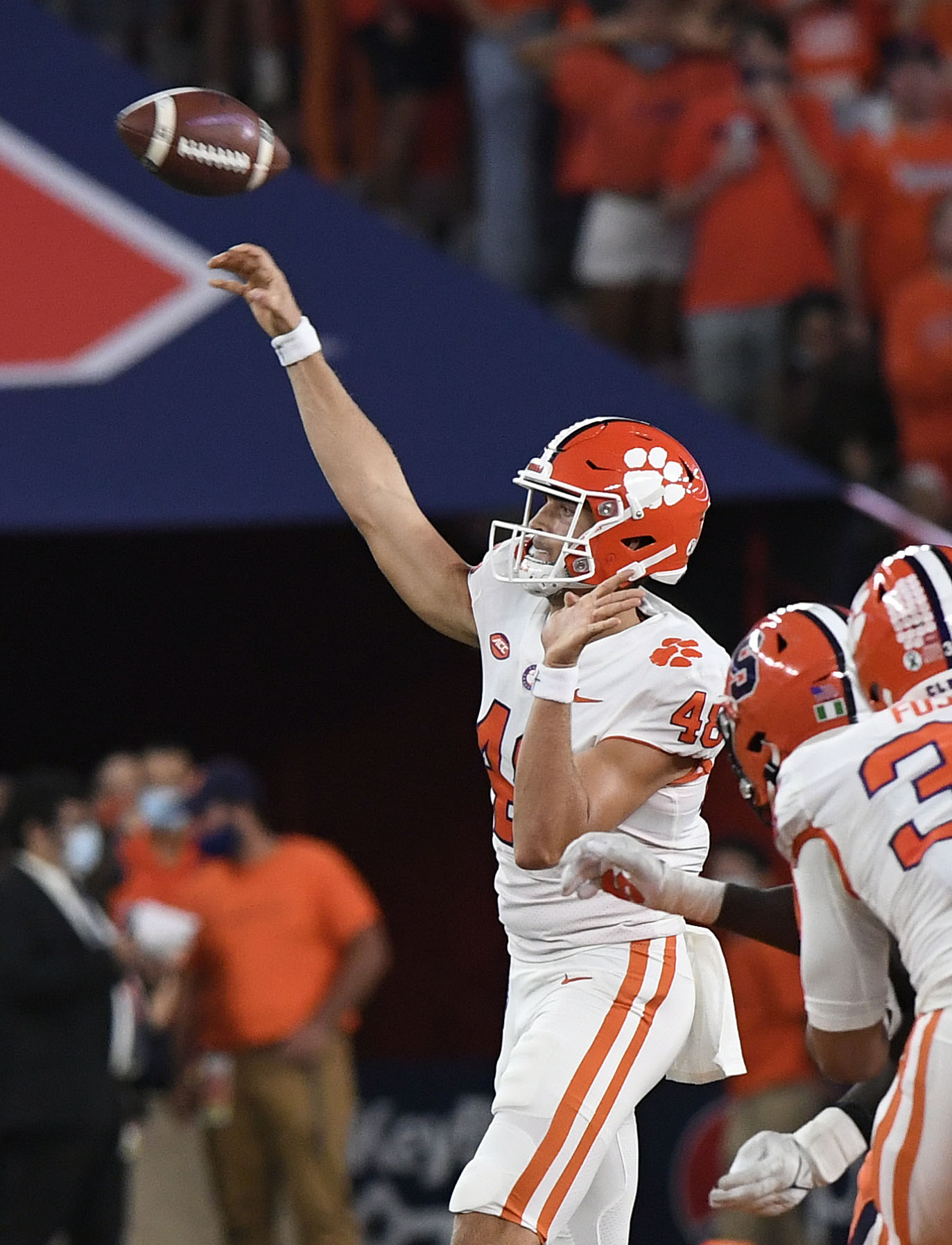 Clemson punter Will Spiers (48) throws a pass on a fake punt play against Syracuse during the 1st half at the Carrier Dome in Syracuse, N.Y. Friday, Oct. 15, 2021 Bart Boatwright/The Clemson Insider

Syracuse cornerback Garrett Williams had Allen covered, but the 6-foot-6, 250-pounder extended over Williams to haul in a 17-yard pass to keep the drive alive.

“I just felt like we had it set up,” Swinney said. “And it was just a matter of making the right type of throw, and (Spiers) did. And Davis went up and finished the play.”

Of course, Spiers being a former high school quarterback gives Swinney more comfort in making that call. Uiagalelei said Spiers, who also serves as Clemson’s emergency signal caller, slings the ball around during seven-on-seven drills in the summer.

“That was a dime, man,” Uiagalelei said. “That was a huge game-changer.”

It’s the second straight season the Tigers have successfully pulled off a fake punt against Syracuse. Without it, Clemson may have been lamenting a loss late Friday night instead of discussing a win.

Seven plays after Spiers’ completion, the Tigers went up 14-7 on Kobe Pace’s 2-yard touchdown run in the final seconds of the second quarter. It put Clemson in position to take a two-score lead on B.T. Potter’s 40-yard field goal with 9:22 left in the fourth quarter, a cushion the Tigers needed after Syracuse made things interesting late.

“It was a big play for us,” Swinney said.