A couple of Clemson freshmen earned recognition from ESPN at the halfway point of the 2021 college football season.

Tate has seen action on offense in five of the Tigers’ six games this season, starting four of them, and totaling 270 snaps overall.

The Sunrise, Florida, native started and played 48 snaps vs. Georgia in his collegiate debut on Sept. 4, becoming only the third true freshman offensive lineman since 1973 to start a season opener for Clemson.

“Making the jump from high school to college comes with a learning curve,” Luginbill wrote in the ESPN+ article. “It hasn’t been a flawless transition for Tate, but the game seems to be slowing down for him, and he is showing real improvement for a Clemson team that hasn’t dominated in recent years.”

Mukuba, meanwhile, has started each of Clemson’s first six games and played 303 total snaps, tallying 28 total tackles — good for third on the team — to go with five pass breakups.

The Austin, Texas, native started in his collegiate debut vs. Georgia, contributing eight tackles and a pass breakup while becoming the first true freshman defensive back to start a season opener for Clemson in records back to 1973.

Mukuba recorded his first game with double-digit tackles at NC State on Sept. 25, posting 11 tackles (one for loss).

“To play safety in defensive coordinator Brent Venables’ defense, players must have a high understanding of football,” Luginbill wrote. “Inserting a freshman is uncommon, and it hasn’t happened in a season opener for the Tigers since 1973. The ultra-versatile Mukuba made his collegiate debut versus Georgia and posted eight tackles and a pass breakup.” 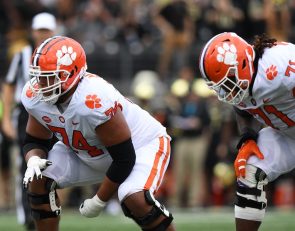