The Clemson Insider checked back in with this standout Peach State defender to get the latest on his recruitment, what he’s been hearing from Clemson of late and more.

“I talked to him by text last Thursday,” Ford said earlier this week, “but we don’t talk all the time, maybe once a week. But they sent me a (recruiting) graphic tonight as well, so hopefully that’s a good sign.”

What is Venables’ message to the 6-foot-2, 215-pound junior right now?

“He just tells me to keep up the good work and be patient,” Ford said.

Some of those schools are sticking out to Ford, who has a timeline in mind for when he wants to cut down his recruitment and then render his commitment.

“I plan on narrowing it down on New Year’s and making my decision either at the end of my junior year or right after the summer,” he said. “Right now, South Carolina, Auburn, Notre Dame, Tennessee really stand out to me. They have no doubts about what I can do, and we talk often. I plan on going to the other schools that have offered me in the next few weeks, so I will know more then. So, it’s hard to say right now.” 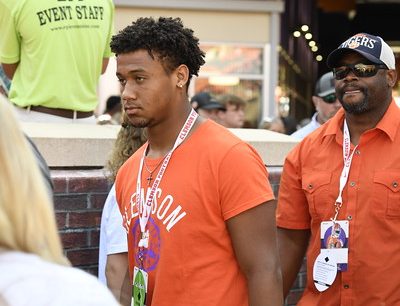 Ford camped at Clemson this past summer and visited Death Valley for the Tigers’ game vs. South Carolina State on Sept. 11. He has also been to Georgia, South Carolina, Auburn and Tennessee so far this season.

Clemson invited Ford back to campus for next weekend’s game against Florida State, but he won’t be able to attend as he is scheduled to visit Notre Dame for its clash with North Carolina.

“Trying to get back up there soon,” he said of Clemson, “but it may be in November because my mom is making me go check out other schools that have offered me. They invited me back on the 30th but I can’t make that one.”

Ford has played some on the D-line for Calvary Day during his junior campaign, though most schools, including Clemson, are courting him as a linebacker – the position he would prefer to play at the next level.

After breaking his hand during a preseason practice and having surgery to get screws put in it, Ford is fully recovered from the injury and has returned to being a versatile defender for his team.

“It’s great,” he said of how his hand is doing. “Completely healed and so glad to be out of that cast. Finally back to playing multiple positions.”

Ford has tallied 31 tackles, including 11 for loss and four sacks, this season according to MaxPreps.