“I remember when I was a freshman and I got in for a couple reps and I messed up, and he told me, ‘Skalski doesn’t get another rep the rest of the practice!'” Skalski recalled.

“Little did I know, I wasn’t going to take another rep for 10 more weeks,” Skalski added with a smile.

Skalski has certainly made up for the lost time and seen plenty of action during his six years as a Tiger. His 56 career games played entering 2021 were already tied for ninth-most in school history, and he is the only player ever to play in five ACC Championship Games.

In six games this season, Skalski has posted 49 total tackles, tied with fellow linebacker Baylon Spector for the team lead.

@JamesSkalski, captain of the @ClemsonFB Defense, shares a story about playing for the man, the myth, the legend @CoachVenables 😂 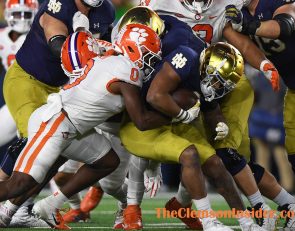 Carter on defense: ‘No one needs to be the superhero’